Three-door superminis blend racy looks with affordable prices, we see if Hyundai’s new i20 Coupe is better than the Vauxhall Corsa 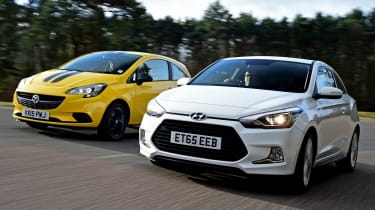 In the cut-throat supermini market, you tend to have two bodystyles to choose from: a practical five-door or a sporty three-door. Some makers are happy to offer either option with the same basic outline, but Hyundai has added extra flair to the class, in the form of its i20 Coupe.

It has a similar appearance to the five-door up front, but the high-set tail and small windows provide a racier look. Hyundai has also added a 1.0-litre turbo petrol engine to the range, which boosts efficiency and delivers a healthy 118bhp in the flagship Sport model.

The new i20 Coupe follows a template that was pioneered by the Vauxhall Corsa, and it’s the sporty three-door Corsa it faces in this test. 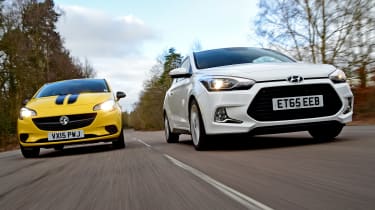 The supermini was revitalised by a facelift and under-the-skin changes in 2014, and the SRi VX-Line model tested here has a lower price tag than the Hyundai, yet a similar amount of kit. It holds plenty of youthful appeal, so the question is: can the i20 Coupe compete?

Hyundai has taken a leaf out of Vauxhall’s book and given the i20 Coupe a distinctly different look compared with the five-door.

As a result, the high-set rear end looks similar to the Corsa’s, while both cars get a slash in the rear C-pillars. Vauxhall offers a more vivid colour palette, while VX-Line adds bigger wheels and a bodykit over the standard SRi. 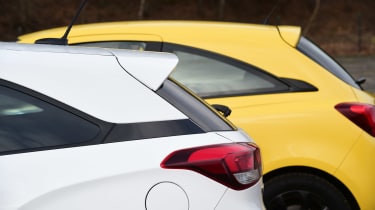 There aren’t many options on the i20, but you can add sat-nav, DAB and a rear camera for £675. The Corsa SRi VX-Line features Vauxhall’s IntelliLink infotainment system and DAB radio as standard, while you can upgrade to its OnStar driver assist service and add xenons.

While the i20 is the more powerful car here, the Corsa proved quicker in almost all of our acceleration tests. It has a broader spread of torque and shorter gearing, and if you could turn off traction control, it would have been faster from 0-60mph. 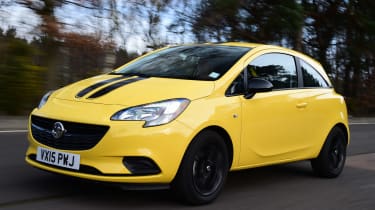 Both of these cars have their merits, but it’s the Corsa that narrowly takes the spoils. The 1.0-litre engine is a real gem, as it’s powerful enough for most needs, yet still reasonably economical, while the fine-handling chassis is comfortable when you want to take it easy. A slightly lower list price is tempting, although some of the standard kit omissions are puzzling to say the least. 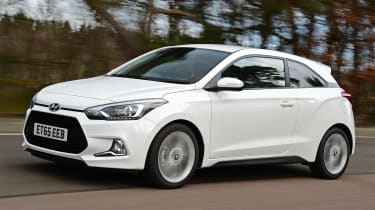 There’s plenty to like about the i20 Coupe, as it’s well built, looks smart and is well equipped. However, it’s a bit pricey when compared with the Corsa, while the car’s chassis doesn’t deliver the handling its racy look warrants. The engine isn’t as sporty or as refined as the Vauxhall’s unit, either. Plus Hyundai’s image may not be exciting enough to tempt younger buyers. 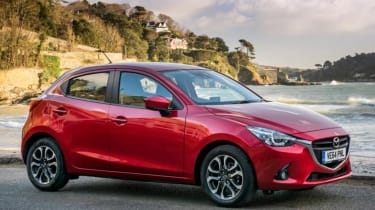 If you’re looking for a fun supermini to drive, then the Mazda 2 is a better bet than either rival here. It’s a five-door only, but it still looks racy, while the revvy 1.5-litre engine is a close match for CO2 emissions, at 117g/km. 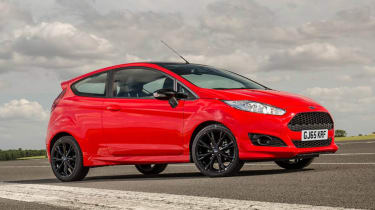 Three-door Fiesta doesn’t have a big boot, but the 123bhp version is as fast as our test cars, while 99g/km CO2 emissions mean road tax is free. You should also be able to haggle a discount at the dealer.