Three-door Hyundai i20 Coupe is good value and looks great 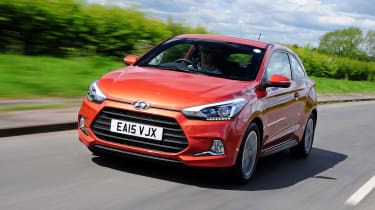 In the cut-throat supermini market, you tend to have two bodystyles to choose from: a practical five-door or a sporty three-door. Some makers are happy to offer either option with the same basic outline, but Hyundai has added extra flair to the class, in the form of its i20 Coupé.

It has a similar appearance to the five-door up front, but the high-set tail and small windows provide a racier look. Hyundai has also added a 1.0-litre turbo petrol engine to the range, which boosts efficiency and delivers a healthy 118bhp in the flagship Sport model.

The new i20 Coupé follows a template that was pioneered by the Vauxhall Corsa, while other rivals include the three-door Ford Fiesta and Volkswagen Polo, although those two stick to a conventional hatchback look.

Under the skin the i20 Coupe is identical to the five-door version that was launched in 2015, and while the range is narrower than the five-door, and is topped by Sport trim instead of Premium, prices are the same as the stadnard car's.

Despite the obvious associations with the i20 five-door, Hyundai wants us to think of this new i20 Coupe as a totally separate model. There’s plenty to like about it, too, as it’s well built, looks smart and is well equipped. However, it’s a bit pricey when compared with rivals such as the Vauxhall Corsa, while the car’s chassis doesn’t deliver the handling its racy look warrants.

Buyers get a choice of two engines – an 83bhp 1.2-litre petrol, or a 1.0-litre turbo petrol with 99bhp or 118bhp. The lower powered versions aren't very quick, but the 118bhp car delivers sprightly performance and a rasping three-cylinder exhaust note. However, it's not as sporty or as refined as Vauxhall’s three-cylinder turbo.

There are three specs to choose from, SE, Sport and Sport Nav, with all cars offering a decent level of kit. In fact, the spec sheet is so generous, the only options on the entry-level SE are metallic paint and fixed price servicing. That means all cars get LED daytime running lights, Bluetooth connectivity, 16-inch alloy wheels and cruise control. Top-of-the-range Sport Nav cars add sat-nav, DAB radio and a reversing camera.

Sporty looks aren't backed up by a sporty driving experience

The i20 Coupe comes with an 83bhp 1.2-litre petrol or a 1.0-litre three-cylinder turbo engine with 99bhp or 118bhp. The latter likes to be revved, but while the i20 Coupe feels sprightly in isolation, the Vauxhall Corsa with 115bhp 1.0T power is faster.

To all intents and purposes, the i20 Coupe feels almost exactly the same to drive as the five-door. That’s no bad thing, with the comfortable suspension setup feeling nicely damped around town and surprisingly composed on the motorway. There’s very little body roll and the steering feels direct.

In corners, the i20 is a reasonable performer, with plenty of grip and minimal body roll. Those low-profile tyres help the Hyundai maintain composure, but push the limits and the car resorts to understeer. That means the i20 is safe at speed, but there’s not much fun to be had and the steering doesn’t offer much feedback.

The tyres also have an adverse effect on the ride. Where a Corsa soaks up bumps with ease, thei20 Coupé fidgets and is unsettled over expansion joints. Plus, the engine isn’t as refined as Vauxhall’s 1.0T. The Hyundai isn’t hugely uncomfortable, but it would put you off doing a longer motorway journey. Around town there’s a tight turning circle to boost manoeuvring, while the standard rear parking sensors provide added peace of mind. 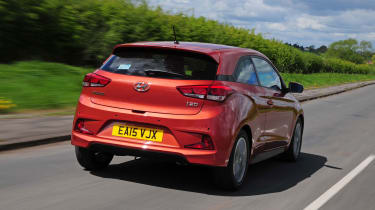 The 1.2-litre i20 only gets five gears, but it’s quiet around town, and there’s enough sound insulation to cover longer distances if the need arises. The 1.0T models get a six-speed gearbox, and while the gearlever feels chunky in your hand, the shift is smooth and precise.

Models are well equipped, and economy is competitive for the class

AT £15,525, the i20 Coupé 1.0T 120 Sport is £755 more than a 1.0T Corsa SRi VX-Line, but you do get a little bit more equipment for your money, including rear parking sensors and climate control. The i20’s higher list price means company car users will face bigger bills.

We achieved 41.3mpg economy when testing the flaghsip 120 Sport Nav model, although our car had less than 1,000 miles on the clock, so it should get more economical once it has loosened up.

Service costs for the Hyundai are reasonable, although you can only travel 10,000 miles between checks, compared with 20,000 miles in a Corsa. At least there's a five-year warranty for added peace of mind

Sharp looks, but i20 looks more like a sporty three-door than a proper coupe

The three-door i20 Coupe is largely identical to the five-door from the headlamps back to the base of the A-pillars, so you get the same angular light set-up and a slender grille above a gaping lower air intake. Bright LED daytime running lights also feature.

Further back, the windscreen is shallower than the five-door’s, while the roof sweeps back to a high-set tail. The Coupé is 80mm lower than the standard hatch, while the long doors, small glass area and lightly flared rear wheelarches add interest to the car’s appearance. Sport versions come with 17-inch alloy wheels and low-profile tyres, while the rear spoiler and sculpted back bumper are incorporated into the i20’s profile.

Overall, the Hyundai is handsome compared to the racy Vauxhall Corsa, and there’s a hint of VW Scirocco about it, which is apt, because this three-door is more like a hatch than a coupé in its appearance. While the brand doesn’t offer racing stripes or any other personalisation options like the Vauxhall, bright red and orange pearlescent paints are available for £515, although the i20 looks smart even in standard white.

Climb inside and you’ll notice the Coupé shares its layout with the five-door model. That means there’s plenty of black plastic, yet you can specify sharp looking orange dashboard trim as a no-cost option to give the cabin a lift. There’s cool blue lighting for the centre console and white dials, while the seats are finished in black and grey cloth. Silver trim around the base of the gearlever and on the climate and entertainment controls looks great, while upgrading to Sport Nav trim adds a seven-inch touchscreen.

Overall quality is decent, and although some of the plastics do feel a bit flimsier than the ones ina Corsa, the seats are more comfortable than its rival’s. Standard kit is pretty good, yet theVauxhall does feature a similar amount of equipment. Two-zone climate control and rear parking sensors are included, while you can add sat-nav, DAB radio and a rear camera for £675.

There's a bigger boot than the five-door, but back seats are tricky to access

Technically, the Hyundai i20 Coupe gets a bigger boot than the five-door hatchback. However, because all Coupes get a space-saver spare wheel as standard, the 336-litre boot drops to 311 litres – although you do get a slim under-floor storage area beneath the boot floor. Fold the seats and the Coupe reveals 986 litres, compared to the five-door’s 1,042 load area. 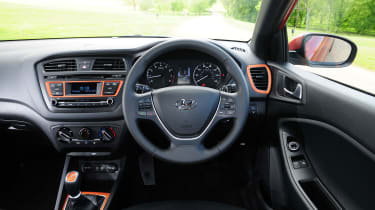 However, in reality, if practicality is of major concern, you’ll be far better off with the five-door car. The extra doors make accessing the rear seats much easier, and the higher roofline means space in the back is more generous. That’s not to say it’s small in the Coupe – you’ll comfortably fit two average sized adults behind a similarly-sized driver. One neat addition is the handy seatbelt holders for the front seats. These click into place and put the belts in the right position when they’re in use, but they drop down out of the way when you need to access the back seats.

There are no such quibbles about space up front, although the seats don’t remain in their set position after you’ve flipped them forward, so you have to manually adjust them every time you put them back.

Five-year warranty means the i20 Coupe is a sensible choice

Safety is a big concern for younger drivers and, of course, their parents. Six airbags, electronic stability control, hill-start assist and tyre pressure monitoring are all included, as is a space saver spare wheel. The five-door model earned a four-star Euro NCAP rating, losing a star because Hyundai has yet to add active city braking to its supermini.

Hyundai came a disappointing 21st out of 32 manufacturers in the 2015 Driver Power owner satisfaction survey – down three places from 2014. However, with poor scores for ease of driving and ride quality, the i20 should help bump the brand up next year.

It’s clear that Hyundai has faith in the i20's reliability, as it comes with the brand’s five-year warranty. That should make it a hassle-free ownership proposition, while five-year breakdown cover is also a bonus.

More on i20 Coupe 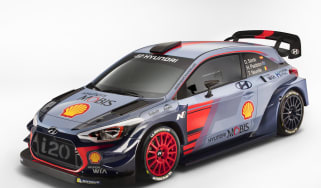 New i20 Coupe WRC shows off its aggressive new looks for 2017, with an extra 80bhp to match
Hyundai i20 Coupe vs Vauxhall Corsa 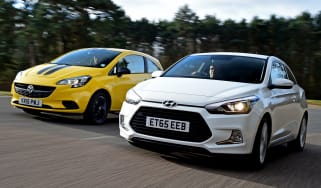 Three-door superminis blend racy looks with affordable prices, we see if Hyundai’s new i20 Coupe is better than the Vauxhall Corsa
Hyundai i20 Coupe 1.0 turbo 2016 review 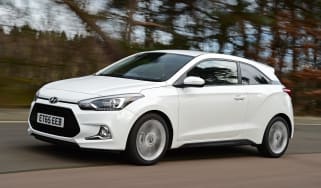