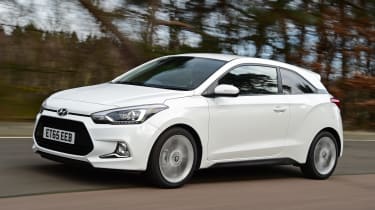 The i20 Coupé has plenty of appeal thanks to its sharp looks and long list of kit, while the 1.0-litre turbo petrol engine is a decent performer. You need to keep the revs up to make the most of its power, although the decent six-speed gearbox ensures that’s no hardship. Although the handling is tidy, it could be more engaging, but for most buyers the respectable running costs will offset any lack of driving involvement.

When Hyundai launched the second-generation i20 last year, it marked the start of a new, youthful approach for the supermini. Not only did the range get a fresh look, the three-door was rebranded as the i20 Coupé. Now, for the 2016 model year, Hyundai has added a sporty new engine to the line-up in the shape of a 1.0-litre three-cylinder turbo petrol.

The unit comes in two states of tune. The 99bhp version replaces the naturally aspirated 1.4, while topping the range is a new 118bhp version, which is the most powerful engine seen in a roadgoing i20. 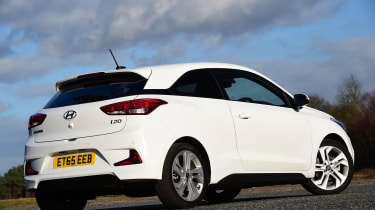 Fire it up, and you’re greeted by a familiar three-cylinder thrum from under the bonnet, although there’s no vibration to go with it. The engine revs freely, and has more of the character of a naturally aspirated unit than a modern turbo. While rivals offer decent power from low revs, the i20 feels at its best at 5,000rpm and above, while the rorty exhaust note gives the car a sporty edge.

You get a six-speed gearbox, but while the lever feels a bit chunky in your palm, shifts are smooth, so it’s easy to keep the engine revving and make the most of its power. 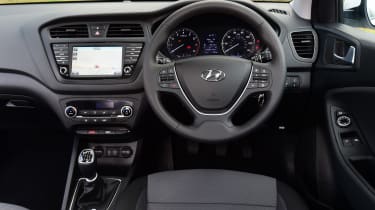 In corners, the Hyundai is safe rather than sporty. There’s plenty of grip and body roll is kept in check pretty well, but the steering wheel doesn’t provide much feedback and the whole chassis is designed to deliver safe understeer when you reach the limits of grip. Take it easy, and while the engine isn’t too raucous, those large 17-inch wheels add a firm edge to the ride; it’s not uncomfortable, but it means the car fidgets at motorway speeds.

Elsewhere, the i20 Coupé is a smart-looking three-door, although it’s more of a racy hatchback than pure coupé. But that’s no bad thing, as interior space is on a par with the five-door’s, and there’s marginally more boot space, too. Access to the back seats is a little tricky, as the doors aren’tthe biggest, but there’s decent room for two and a tiny middle rear seat if you really need to carry a third passenger. 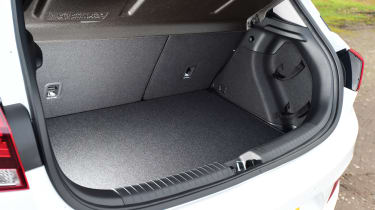 At £16,200, our Sport Nav test model isn’t cheap – it’s pricier than a 123bhp Ford Fiesta Titanium EcoBoost – but then it comes with a long list of kit, including sat-nav, DAB radio, reversing camera and cruise control. Plus, Hyundai’s five-year warranty is still an attractive bonus.