Is the well-equipped Hyundai i20 Turbo Edition the new supermini’s sweet spot? 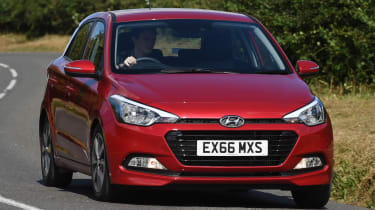 The handsome looks and practicality impress, but it’s on value for money that the i20 Turbo Edition plays its trump card. It has equipment and space that a similarly priced Ford Fiesta can only dream of. The claimed fuel economy figure of 72.4mpg could be difficult to achieve, so you’ll have to adapt your driving style to get the most out of the engine. But otherwise, this is a strong package.

Before anyone gets ahead of themselves, the new Hyundai i20 Turbo Edition is not some fire-breathing hot hatch, nor a rival to the lavishly equipped Ford Fiesta ST Line. The i20’s new Turbo Edition trim level sits comfortably in the middle of the Korean supermini’s line-up and its appeal is based around value rather than searing performance or a super-sized equipment list.

The ‘turbo’ part of its name comes from the 1.0-litre, three-cylinder turbocharged petrol engine in the nose that develops 99bhp. Prod the accelerator and you’re met with a characterful thrum, perky acceleration - when you’re in the right gear - and a tax bill of just £20 a year thanks to low CO2 emissions of 104g/km.

The downside to the downsized unit is turbo-lag at under 3,000rpm, so you have to work the smooth-shifting five-speed manual gearbox a little harder than you might expect. After we tested the hatch on country roads and suburban streets using all of the gears, we were averaging around 45mpg – roughly 30mpg less than claimed.

Handling wise, very light steering makes town driving a doddle and body roll is well controlled around sharp country bends. The Hyundai i20 is safe and composed rather than sporty if you take a back road home, but this means you can place the car with confidence when the going gets twisty. 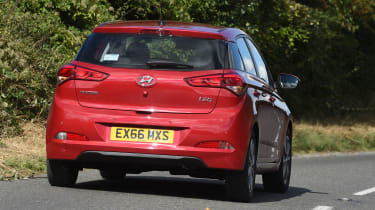 Little separates the Turbo Edition visually from other i20 models other than a horizontally-slatted front grille. You could argue that the rotor-style 16-inch alloys count, but they’re already standard fare on the more expensive i20 Premium models regardless of the engine you choose.

Inside, the dashboard is simple and well organised, if a little bland. Material quality is good enough for a car in this class but nothing to write home about. Turbo Edition cars are based on the mid-range SE spec; you get cruise control, Bluetooth and DAB radio, plus a seven-inch TomTom sat-nav system with seven years of live traffic updates, a reversing camera and automatic headlights. 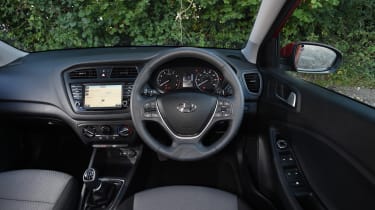 The touchscreen sat-nav is the biggest benefit of all the additional kit the Turbo Edition gets; it means you can now spend around £1,700 less than before if you want your new i20 to come with GPS guidance.

Rear space is pretty decent, but the i20’s practicality party trick is its enormous boot. 326 litres of boot space makes it more practical than almost every other car in its class (the Skoda Fabia has 4 litres more), and it even puts the Ford Focus - a car from the next class up - to shame.

Add all of this together and you have a car that is worth its sub-£13k price tag. If you want a small turbo petrol Ford Fiesta with a similar amount of equipment, you’ll have to fork out around £3,000 more for a 1.0-litre EcoBoost Titanium model. On that basis, the Hyundai i20 Turbo Edition is well worthy of consideration.