Can the Hyundai i30 Fastback N offer the same great driving experience as its hatchback sibling?

On the eye, the i30 Fastback N represents a refreshing departure to the norm, and to most, a welcome improvement over the original i30 N hatchback. But on the road they are essentially one and the same car, even if the Fastback’s ride is a touch smoother thanks to a range of small tweaks to the body stiffness and suspension. Overall, it’s a great addition to Hyundai’s increasing range of N cars – and proof there’s a lot more to come in the future. Watch this space.

First came the i30 N hot hatchback. Engineered and developed for Hyundai by an ex-BMW M Division engineer, it was an impressively accomplished first attempt at a genuinely sporting family car. Now, though, comes the Fastback version, and as we’ll discover, it’s a pretty good effort as well.

Priced at £29,995 (£500 more than the hatch) and using the same fundamental underpinnings as the 271bhp, front-wheel-drive i30 N that made its debut to such acclaim in 2017, the Fastback N is actually the third car from Hyundai’s new N Division. The second, the Veloster N, isn’t sold in Europe. 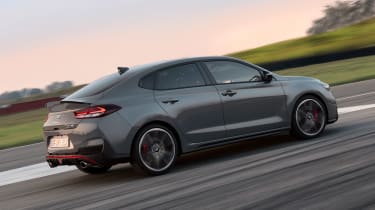 Even in the relatively short time between the launch of the hatch and this latest Fastback version, several improvements have been made. The engine, gearbox, exhaust and five-stage drive programme are exactly the same, but the bodyshell, chassis, and suspension have all been massaged to make the Fastback a little bit stiffer (in terms of torsional rigidity) but a little bit softer, too. It should make the car a fair bit more civilised to drive, says Hyundai.

Without going into exhaustive detail, the body itself is around seven per cent stiffer, the front anti-roll bar is a fraction smaller and softer, and the bump-stops bigger and longer, while the bushings have been softened all round, too. The differences are designed to answer at least some of the questions posed by the hyper-stiff original, especially in the car’s harshest ‘N’ mode.

Unlike on the hatch, there is just one Fastback N on offer to UK buyers. The half-fat 247bhp version is conspicuous by its absence, meaning your only option is the full beans 271bhp/353Nm 2.0-litre turbo found in the i30 N Performance hatch. Hyundai says this is because the take-up of the less powerful model in the hatchback represented less than two per cent of overall sales.

On the road you notice the difference to the suspension right from the word go. The Fastback rides with more maturity in any of its five drive settings; it just feels a little bit more grown up than the hatch, and a little bit less manic in the way it responds – especially over poor surfaces.

The steering also feels more refined – but no less sharp than the hatchback’s – with a touch less unwanted intrusion coming back at you through the rim. Nothing has changed on the steering mechanism itself, however, so the tweaks to the body, suspension and its bushing have clearly had a knock on effect here as well. No bad thing, we might add.

In most ways, then, the Fastback represents a small but significant improvement over the original i30N hatchback, certainly in terms of its suspension behaviour. And all of those aforementioned tweaks will find their way onto the hatch in the near future, too. 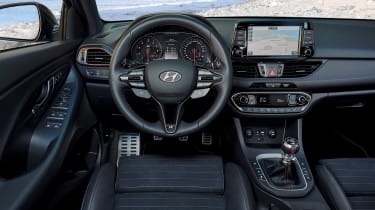 Any major issues with the Fastback N? Not really, no. The car does weigh a fraction more than the hatch, and doesn’t feel quite as bombastic in a straight line as a result. It’s perhaps marginally less nimble during sharp direction changes, too, even though Hyundai claims 6.1 seconds for the 0-62mph sprint and a 155mph top speed. Identical numbers to those of the hatchback, in other words.

The exhaust note never sounds as meaty or impressive as the hatchback’s in N mode, either, but this is down to the different acoustics of the Fastback’s body-shell rather than any alteration to the exhaust system itself.

In the flesh, however, the lower, longer Fastback does look tasty. Every version gets 19-inch wheels as standard, pumped up bodywork all round, a broader range of colour schemes to choose from plus a small but meaningful new tail spoiler at the back. It certainly turns heads. 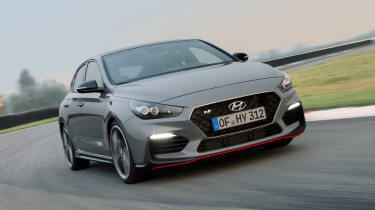 Inside there’s no difference in specification or dashboard design, and there’s nothing whatsoever wrong with that. Both are extremely well equipped – with climate control, full touchscreen sat-nav, Android Auto and Apple CarPlay, as well as most other modern gadgets you could wish for in a car like this. The only option, in fact, is metallic paint at £585.

In the back there’s a fair bit less headroom, however, and from the driver’s seat, rear visibility out of the Fastback’s far smaller rear window is nowhere near as good as in the hatch. The boot, though, is still a decent size for a car with such sweeping good looks.

It is perhaps a small shame the Fastback doesn’t feel as startlingly frantic as the original i30N. It leaves a very mild sense of disappointment; we wanted it to go further, and offer a bit more of everything – if only to prove how rapid the progress is at Hyundai’s N Division.

Maybe that model will come a little later in the N programme. At the moment Hyundai remains pretty tight lipped about its forthcoming ‘halo car’ – other than to say that it will be just that. It will be a brand changer. But whatever that car turns out to be, you can bank on it being quite impressive. Albert Biermann and his team at N don’t seem capable of producing anything less.