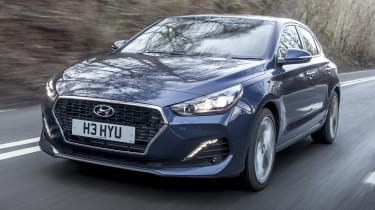 The i30 Fastback is designed as an alternative to mildly sporty variants like the SEAT Leon FR, and other five-door coupes, such as the Mazda 3 Fastback. It's the most convincing i30 in the line-up by some margin, with a solid dynamic package beneath a car that should still be easy to live with, despite the increased focus on styling over practicality. The price looks steep, but generous equipment levels could make this a left-field choice for those wanting something different from the five-door hatchback mainstream.

We were impressed and, dare we say it, a little surprised by the Hyundai i30 Fastback when we tried it aboard late last year. Now we've had the first chance to try the Korean manufacturer's style-focused take on family transport in the UK, to see if it still makes sense.

In fact, 'making sense' is something of an anomaly. Because on most rational grounds, the Fastback's only real hope of ending up on your driveway is the emotional appeal of how it looks. Hyundai hopes that it will attract some of the people left unmoved by the oh-so-tame, conventional i30 hatchback. We'll leave it up to you to decide if the more rakish roofline works - although there's no denying that the car has more kerbside appeal than its sister vehicle.

The car we're testing here has a 138bhp 1.4-litre turbocharged petrol engine, and a six-speed manual gearbox (a seven-speed DCT is available as an option). The motor is best described as 'sufficient'; its 242Nm of torque kicks in somewhere around 2,000rpm, and it'll rev quite happily to well beyond 4,000rpm if you ask it to. But in practice, you'll end up shifting up sooner than that, enjoying brisk progress instead of chasing after the claimed 0-62mph time of 9.2 seconds. Just think of it as comfortable, not rapid, and you'll be on the money. 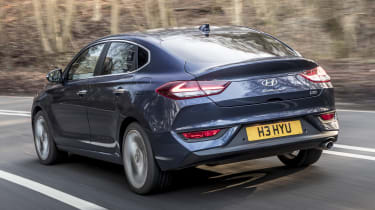 The chassis is frankly very similar. It does most of the basics pretty well; the steering is a little heavy and slow, but at least it's consistent and once you've notched up a few miles behind the wheel, it's easy to place the car. The Fastback stays flat in corners, too, although don't expect it to dance between apexes like a hot hatch; that'll have to wait for the 'N' version that's already in the pipeline.

Most versions of the Fastback come with 18-inch alloys - another nod in the name of style - and there is some trade-off in ride. It's not unbearable, but it does pick up the scarred surfaces that are so common on British roads - and even more noticeably, there's a fair amount of tyre roar from each corner. This is a shame, because the engine is smooth, even when you're pushing it along. 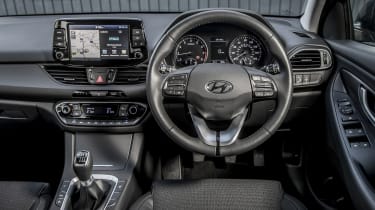 Of course, five-door 'coupe hatchbacks' traditionally suffer from a compromised interior but if anything, the cabin is one of the i30 Fastback's strongest points. There's space on board for four six-foot adults to travel in reasonable comfort, and while there's not as much of an attempt at flair inside as there is outside, the layout is neat and functional, with solid materials. The infotainment system is impressive, too, with a hi-res screen mounted high up in the dash offering both Android and Apple phone integration.