Hyundai has revealed UK prices and specs for its first proper hot hatchback – the Volkswagen Golf GTI rivalling i30 N, which will go on sale in Britain early in 2018.

Prices will start from £24,995 for the car in its most basic 242bhp guise, but Hyundai has now confirmed that UK buyers will be offered the car with its optional performance pack, turning the wick up to 271bhp.

The i30 N Performance Pack will go on sale from £27,995, meaning that the most potent version of Hyundai’s hot hatch significantly undercuts the Ford Focus RS, the Honda Civic Type R, and even the most basic Volkswagen Golf GTI. Order books will open on January 4 2018.

Buyers will be offered a choice of six exterior paint colours, including the new N specific Performance Blue hue. All cars will feature an eight-inch colour touchscreen infotainment system with sat nav as standard.

Hyundai touted the idea of a hot model back at the 2016 Paris Motor Show in the form of the RN30 Concept, while the firm’s involvement in the World Rally Championship since 2014 has delivered the impetus to develop new performance models.

With an extensive Nurburgring testing regime under its belt, Albert Biermann, Hyundai’s executive vice president of its new high performance vehicle division, says that it aims to deliver “an accessible high-performance package”. 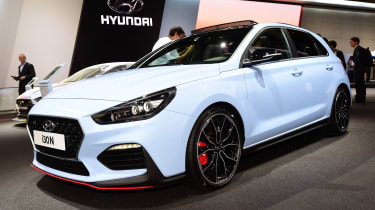 Under the bonnet sits a 2.0-litre turbocharged four-cylinder engine, delivering 247bhp and 353Nm of torque. It means that Hyundai’s new entrant onto the hot hatch scene outguns the 242bhp Golf GTI Performance pack in terms of sheer power, while the i30 N boasts a performance pack of its own, which turns the wick up to 271bhp.

Power is delivered to the front wheels via a six-speed manual gearbox, and the standard i30 N cracks 0-62mph in a claimed 6.4 seconds before going on to a top speed of 155mph. Adding the performance package slashes the 0-62mph time by three tenths to 6.1 seconds, though top speed remains an electronically limited 155mph. 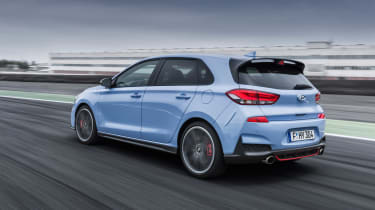 The i30 N boasts a spread of performance parts typical of the latest hot hatches. Launch control and a rev-matching function both feature, plus five selectable driving modes and electronically managed suspension. An ‘N button’ coaxes the car into its most dynamic setup, but drivers can tailor settings through an N Custom mode.

Those who plump for the Performance Package get an electronic limited slip differential, plus larger brakes, a variable valve exhaust system, and larger 19-inch wheels shod in Pirelli P Zero rubber alongside the additional power.

In terms of looks the i30 N fits right in with the current hot hatch crowd. An aggressive new front bumper slots in alongside the car’s trademark front grille, and a sporty red insert has also been added. New air inlets are added to each corner of the car’s front end, aiding aerodynamics and brake cooling.

At the back, the car gains a new rear apron with a diffuser plus twin exhaust exits, while a new gloss black spoiler on the hatch lid is home to a triangular central brake light. 18-inch wheels come as standard.

• Hyundai i30 N Fastback on the way

In the cabin, the dashboard and switchgear found in regular versions of the i30 is paired off with sporty new additions. A sports steering wheel with additional driving mode buttons is found, alongside a golf-ball style gearstick and new sports seats. Contrasting blue stitching is dotted around the cabin.

In terms of tech, a five-inch touchscreen with Apple CarPlay and Android Auto is included as standard – the larger eight-inch display with built in satellite navigation is kept on the options list, but it features new and exclusive N menu displaying power usage, turbo boost, plus a lap timing function. The N menu is also where the driver can alter the car’s customisable settings. Safety and assistance tech is lifted from the regular car, and autonomous emergency braking, lane keep assist and a driver monitoring system make the cut.

Can the new Hyundai i30 N beat the Honda Civic Type R? Let us know in the comments section... 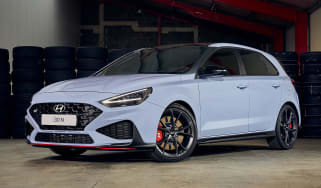 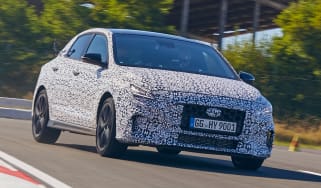 Will a new dual-clutch automatic improve the updated Hyundai i30 N? We try out a prototype version to find out…
New Hyundai i30 N 2020 review