The Hyundai i30N might not be as quick as the fastest hot hatchbacks in a straight line, but that doesn’t stop it from being a great car to drive. Ex-BMW M boss Albert Biermann has had a hand in gifting the car a terrific chassis and brilliant steering, but on top of all that it’s also competitively priced – with more quality and equipment inside than most of its rivals. For a first effort it’s deeply impressive.

Conceived by Hyundai’s sparkling new N division, the i30 N is one of the more intriguing hot hatchbacks of 2017. Mainly because we simply don’t know what to expect from it. The firm has precisely zero history when it comes to making genuine high-performance cars, so the question is: can it succeed straight out the box?

The short answer is yes. In 2014 Hyundai hired Albert Biermann, who for 20 years had headed up BMW’s M Division. His brief was clear: to create a new high-performance sub-brand to spawn a range of fast, exciting cars. And it all starts with the i30 N.

Delivering the goods for an entirely new company, in a different part of the world, is a tough task. But Mr Biermann and his team have worked tirelessly to get the i30 N just right, notching up thousands of miles at their tech centre at Germany’s Nürburgring race track to achieve their goal. And the frankly excellent i30 N is the result. There are numerous reasons why it’s as good as it is. 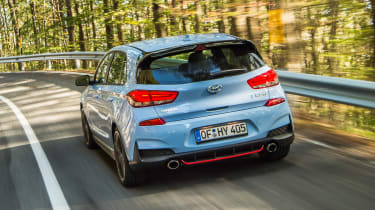 The standard version gets a 247bhp turbo engine, but it’s the 271bhp Performance Package car we’re driving here. This model has a proper electronic differential at the front, which works out all sorts of clever things to keep the front tyres keyed into the road at all times. It gets larger brakes, too.

The electronically damped chassis has been set up to deliver maximum precision as well as a surprising level of comfort and refinement. It rides on a set of Pirelli P-Zero tyres developed especially for Hyundai.

Elsewhere, it has sophisticated electronic dampers at each corner that enable it to do things many other hot hatch rivals can’t even contemplate, both on road and track. 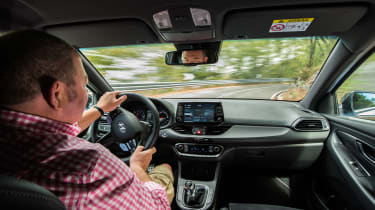 The i30 N also sounds fantastic if you press the N button on the bottom of the steering wheel. Give it full beans in third gear, back away from the throttle and it’ll spit all sorts of pops and bangs from of the exhausts. It’s entirely natural, Hyundai’s engineers claim, and isn’t manipulated like in some rivals. What’s most impressive, however, is the way the i30 N turns, stops and handles. The steering is particularly lovely, with instant response just off-centre. But the car doesn’t feel in any way nervous at the rear, which is some achievement given that it takes just 2.2 turns lock to lock.

The handling is also very sharp, even in Normal mode. Things sharpen in Sport, and there’s a custom setting in which you can tailor the car’s individual traits. In its ‘track-only’ N mode, the ride quality is stiff and uncompromising, but if you’re in the mood and on the right road, it’s a brilliant set-up. The dampers get firmer and the throttle map becomes fruitier, as does the exhaust, while the intervention from the ESP is also trimmed right back.

Performance is strong from the 2.0-litre turbo petrol engine in all modes, without ever being overwhelming. The six-speed manual gearbox has a slick enough action, plus an auto-blipping function that can be manually selected (or deselected) via another button on the steering wheel. 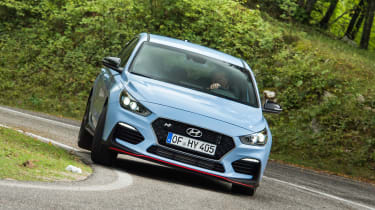 But while the i30 N’s mostly lag-free straight-line performance is perfectly decent in isolation, it’s the car’s chassis that steals the show. This, ultimately, is what makes it so memorable to drive, even if it can’t quite match the very fastest hot hatchbacks in an all-important traffic light drag race.

And then there’s the price. Hyundai knew it needed to undercut the key competition given that it has so little credibility in this market. A figure of less than £28,000 is impressive considering not just how good it is to drive, but also how highly specified it is, and how well built it appears.