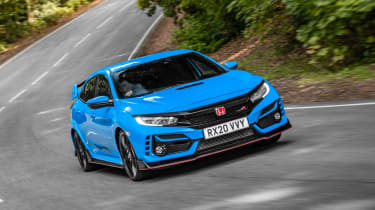 This facelift has not broadened the Civic’s talents to the point where it can outdo the Golf GTI as the best all-rounder on the hot hatch market (we’re keen to try a new Sportline on more forgiving 19in wheels, because it may come close). But the updates do add yet more driver appeal to a vehicle recognised as the enthusiast’s choice at this price point. So you end up with a car which may not necessarily attract fresh custom, but one that has even more allure for anyone who just wants the best-driving fast hatchback on the planet.

Honda may not have too many class benchmarks in its line-up right now, but the Civic Type R is definitely the king of the hot hatch class where drivers are concerned.

It’s been that way pretty much since the current generation of the car hit the road - the point when we all discovered that engineers had managed to dial in some everyday usability alongside the model’s trademark hardcore nature. But with a fresh (and more extreme) VW Golf GTI fast approaching, it’s time for a facelifted version of the Type R.

Honda knows not to mess around too much with a winning formula, so the heart of the Type R remains the same; it’s a 2.0-litre four-cylinder turbocharged petrol engine producing 316bhp and 400Nm of torque.

There are some changes to the chassis, though, with a fresh software profile for the Civic’s trick adaptive dampers, along with different suspension bushings and ball joints. There are new ‘floating’ brake discs that save 2.5kg of unsprung mass and, Honda claims, resist fade more effectively than before.

Inside, there are tweaks to two of the main elements: a new Alcantara steering wheel, and a teardrop-shaped gear knob, which Honda claims improves shift accuracy because it now contains a counterweight. The audio system also incorporates an Active Sound System, which uses the speakers to enhance engine sound in the Civic’s more focused driving modes - and dial it out when you’re pootling along in Comfort mode.

If you don’t want the more extreme elements of the Type R’s styling, incidentally, there’s now new variant called Sportline that does without the big rear wing, swaps the red-trimmed interior seats for more sombre black-only versions, and gets 19in alloy wheels with Michelin Pilot Sport 4S tyres that should have softer sidewalls. Due in showrooms in January, it’s designed as a slightly more subtle, accommodating version of the car, but one which shouldn’t really be any slower in a straight line - although it costs the same as the conventional GT model that we’re driving here, so it’s not as if removing aerodynamic adornments actually saves you any cash. 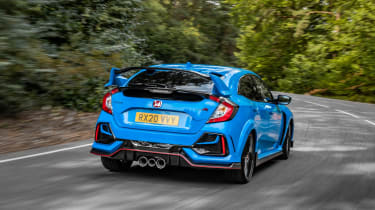 At the other end of the line-up is an even more focused version of the car, called Limited Edition and carrying a premium of more than £5,000 over the regular trim levels. Just 20 cars have made it to the UK, each of them 47kg lighter than usual thanks to the removal of the infotainment screen, sound deadening and air conditioning. They also get 20in alloys with Michelin Pilot Cup 2 tyres. And they’re all already allocated to customers; Honda shifted the lot in a few hours, apparently, and could have sold double the amount.

On the road in the continued GT edition driven here, there’s really only good news - assuming you like what the Type R offered before. The engine feels just as strong as it’s always done, with wallops of torque once you get beyond about 2,500rpm and plenty of pull at 6,000rpm. The sound actuator’s levels are well judged too, with a snarling note in +R mode, restraint in Comfort and an excellent halfway house in Sport.

The re-profiled chassis continues the good work of the pre-facelift model, meanwhile. The steering is beautifully weighted and the nose is keen to respond to inputs - more so than any front-drive hot hatch, we’d argue. And as for the ride, there’s a reassuring band of firmness between Comfort and +R. The first of those settings feels a little firmer than where the latest Golf GTI is positioned, whereas the second seems to more than match the body control of the VW’s most extreme setting but with, if anything, less of a trade-off in overall compliance.

Of course, the Honda can’t offer the Golf’s myriad levels of personalisation - just a trio of factory-prescribed presets. We’d be inclined, in fact, to keep the car in Sport, which offers that fruitier engine noise and suspension that is more dialled in than Comfort, but is still just about compliant enough for most situations. 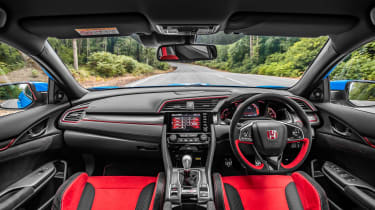 The experience is enhanced by the choice upgrades in the cabin. The Type R’s new gear knob has to be the best on any production car, fitting beautifully in the hand and connecting you to a short and delightfully mechanical shift. The Alcantara steering wheel is great to the touch, softer in the right places yet still easy to grip. And any concerns that what Honda describes as “more immediate feel” in the brake pedal might in fact be just snatchiness are unfounded; the progression and feel are better judged than ever.

The rest of the package remains the same as before - which is to say that the extravagances of the Civic’s complex styling will continue to delight and repel in equal measure. Indeed, the new paint colour of our test car, Racing Blue, seemed to accentuate the Type R’s look, with not a single bodywork crease left unseen. Subtle it ain’t.

The same goes for the cabin, for despite the tweaks to the steering wheel and excellent deep-bucketed seats, the Civic’s environment remains a world apart from the best in the family car class. Nor is the infotainment really any better than before. Honda has added physical buttons to give shortcuts to key functions, after owners complained that the system was fiddly to operate. But the core software running on the screen is unchanged, so you end up with Garmin-based mapping which even looked outdated when the car launched in 2017.