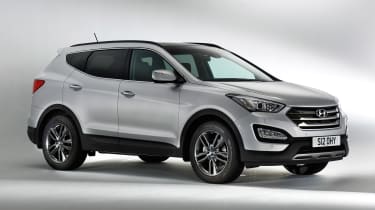 The UK buys more Santa Fes than any other market in Europe, and it’s easy to see why. The Hyundai is so good that we crowned it Best Large SUV at our 2013 New Car Awards – and the same again the following year. When handing over its first award we said: “We had high hopes for the Santa Fe and weren’t disappointed as it ticks all the boxes for buyers of large SUVs. It has the looks that’ll turn heads. It has the comfort needed for long journeys or just trips to the shops. It also has the ability to tackle different terrains and offers huge practicality, with space for up to seven people.”

If Father Christmas were in the market for a used car, there’s a strong chance he’d make a Hyundai Santa Fe his new sleigh. With a vast boot, a dependable diesel engine and strong towing capabilities, the Santa Fe would be more than up to the task of replacing Rudolf and his chums.

When it was first introduced in 2001, the Santa Fe was a five-seater SUV with styling that was outclassed by most rivals. The 2006 Mk2 was a big improvement, but it was third time lucky for Hyundai when the current model went on sale five years ago.

With its smart design, seven-seat interior and cutting-edge equipment, it was finally good enough to compete; and £14,000 can get you your very own Christmas cracker. 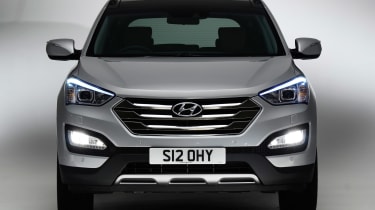 Hyundai showrooms started selling the third-generation Santa Fe in October 2012. Only one engine was available, a 2.2-litre diesel, and it was hooked up to a manual or automatic gearbox. There were three trim levels (Style, Premium and Premium SE). Entry-level cars were two-wheel drive; the other trims were four-wheel drive only.

In late 2014 Style was renamed SE, then a facelift in January 2016 brought a more efficient engine (now 197bhp instead of 194bhp) and a raft of new driver aids, such as adaptive cruise control, autonomous emergency braking, a 360-degree parking camera, adaptive headlights and blindspot detection. From this point on there was no  SE trim and all cars were four-wheel drive.

The 2.2 CRDi diesel engine came in just one state of tune and there are few two-wheel-drive cars around; all facelifted Santa Fes have four-wheel drive, which is one of the reasons why it makes such a great tow car. 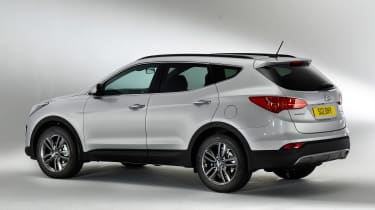 Kia’s mechanically similar Sorento is the Santa Fe’s closest rival. The Kia has the same 2.2-litre diesel engine and gearbox options, plus similar technology, but the Sorento is slightly dearer due to its better equipment and higher-quality interior.

In comparison the Nissan X-Trail and Mitsubishi Outlander feel rather ordinary, while the original Volvo XC90 is dated but can still make a good used buy. The Land Rover Discovery is also showing its age and is more expensive, but it’s still impressive. Yet running costs are likely to be significantly higher, partly because of its bulk and partly because it tends to be less reliable.

Only the Premium SE automatically comes with seven seats. Style and Premium-spec cars are also available in five-seat form. 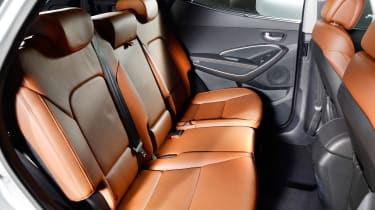 The panoramic roof brightens up the cabin, but a few owners have had problems with the glass shattering. However, it’s not a widespread fault.

Hyundai has had to replace some alloy wheels under warranty, due to corrosion and the lacquer peeling. So look for any damage before buying a car.

Automatic gearbox pushes up fuel consumption and blunts performance, but it’s nicer to use than the notchy manual alternative.

You won’t be wowed by the Santa Fe’s cabin, but it does a great job of accommodating five adults in comfort, with the third row best suited to children. The quality of the materials is generally very good, and the boot can stow up to 1,680 litres in five-seater form; the seven-seater reduces this to 1,615 litres. 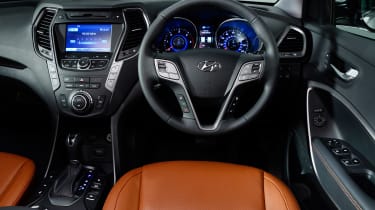 All third-generation Santa Fes need to be maintained every two years or 20,000 miles. Although the service schedule alternates between minor and major, there’s not much price difference between the two, because they cost £327 and £353 respectively.

Once a car reaches its fifth birthday, it’s eligible for cut-price maintenance with the two services discounted to £189 and £289 respectively. A basic service involving an oil and filter change is also available for £129.

Although the Hyundai’s diesel engine is chain-driven, a fresh set of auxiliary belts is required at every third service. The cost of replacing these is around £600. At the same time the coolant should be renewed, but the cost of this is built into the maintenance charge. 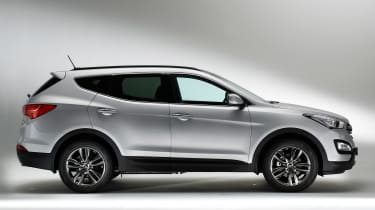 The original Santa Fe was only recalled once and the same was true of its successor, but the current, third-generation Santa Fe has yet to be called back by the Korean marque.

Since 2012, Hyundai has issued just 10 campaigns, and only one applies to a car built after the Santa Fe’s launch. This concerns Tucsons built between January 2015 and March 2016, as the safety catch on the bonnet could fail. That’s an impressive record, and just one model from Hyundai’s entire current range has been recalled.

The Santa Fe Mk3 hasn’t appeared in our Driver Power surveys and neither has the similar Kia Sorento. Hyundai’s Tucson managed an impressive 17th place; the i10 and i20 were 57th and 29th respectively.