Yet to establish an identity, could the Santa Fe be the most profile-raising launch yet for Hyundai? 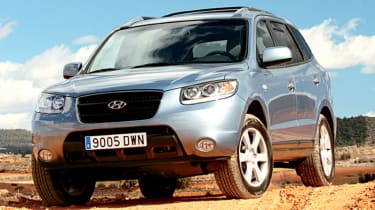 Attractive, well built and versatile - especially in seven-seat form - the Santa Fe is a huge improvement over its predecessor. As well as the usual five-year warranty and good kit, you get a fine diesel and surprisingly competent road manners. But are people ready to pay £20,995 for an entry-level Hyundai?

If Audi is known for quality design, Toyota for solid engineering and Alfa Romeo for flamboyant style, what sets Hyundai apart from the crowd? The Korean firm has yet to establish a true identity, but a new car has just arrived which could help it become a household name in the UK.

While some of the latest Santa Fe's styling isn't particularly original, the overall effect is very attractive, maintaining the right balance of sophistication and aggression. At 175mm longer and 65mm higher than its predecessor, it now sits between the Toyota RAV4 and Land Rover Discovery.

The largest engine offered in the UK is a revised version of the firm's 2.7-litre V6 petrol unit, tuned to produce 186bhp, but its performance is disappointing. Hyundai expects around 90 per cent of buyers to opt for the new 148bhp 2.2 common-rail diesel CRTD instead.

And it's a peach - flexible, lag-free, responsive and refined. The standard five-speed manual box and £1,000 optional five-speed auto work well with the 335Nm of torque, while CO2 emissions and combined fuel economy figures of 190gkm and 32.2mpg are acceptable given the Santa Fe's size.

The chassis is set up for comfort, not outright grip, while the steering is a touch heavy and utterly devoid of feel. Electronically controlled four-wheel drive gives the Hyundai decent off-road capability, with all but the most violent of bumps ironed out. Inside is the company's best-ever cabin. Some cheap plastics aside, it's nicely trimmed and well screwed together. The ergonomics are hard to fault, as is the seating layout. There's ample rear room, and the single-lever folding set-up creates a virtually flat load floor.

You can also add an extra row of chairs, which fold flush into the boot floor and bring the total up to seven. At only £600 - including self-levelling suspension - this is sure to be a popular option, especially as it doesn't affect luggage space, but the seats are strictly for children. The new Santa Fe is the best car from Hyundai yet, but is not cheap. It is bigger than Toyota's RAV4, yet it's also more expensive.