With gadgets becoming a bigger part of daily driving, our Hyundai Santa Fe’s mammoth capacity for hi-tech kit is welcome 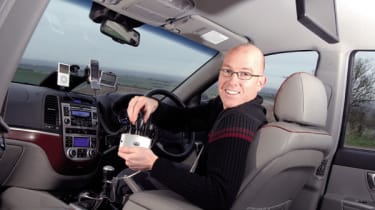 Confession time: I’m a gadget freak. Sat-nav, MP3 players, mobile phones, DVD machines: you name it, and as long as it goes beep and has buttons to press, I love it.

As our ‘Gadget or Gimmick?’ road test special showed, today’s cars are filled with an increasing amount of technology. And our long-term Hyundai Santa Fe is a greatexample of what I mean.

It’s a range-topping CDX+ model, which means it comes with a roof-mounted DVD player and a coolbox compartment on the transmission tunnel.

This is all useful stuff for families – the Santa Fe has been called into service on numerous occasions over the past 10 months. Everyone who’s used it has commented on how good the screen is at keeping children occupied on long trips, while the can cooler is pretty efficient, too.

But what’s made the Hyundai so useful is its four 12-volt sockets – two up front, one in the passenger compartment and another in the boot. That’s rare, but shows real thought, as it allows you to plug in an iPod, phone charger and portable sat-nav simultaneously. What’s more, the Santa Fe’s great stowage means everything can be hidden out of sight when parked.

In other areas, it is not so hot. The dealer service disappoints. Having paid £347.40 for a 20,000- mile service, associate editor Tom Johnston was unhappy to find out that a valet wasn’t included. “It’s not our policy to wash cars after a service,” a spokesman explained. “But maybe that’s something we should look at.”

Poor service aside, the Santa Fe continues to win admirers; our consumer reporter even managed to squeeze eight folding bikes on test in the back. The leather trim has stood up well, too, and the impressive 2.2-litre VGT engine seems sweeter than ever – not least because fuel economy rarely drops below 30mpg.