Can the all-new Hyundai Santa Fe beat its rivals from Volvo and Chevrolet? 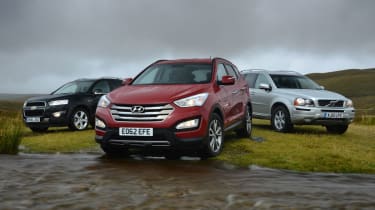 Hyundai is nothing if not ambitious. Over the years, it has pushed hard to improve the quality of its cars, inside and out.

In fact, it’s come so far from its humble budget origins that today, the i30 is a front-running family hatch for build quality and style.

You can pinpoint this sea change to one car: the second-generation Santa Fe, which was launched in 2006. But now it’s time for this pioneer to be replaced, and Hyundai is again pushing boundaries with the third-generation model.

The new car is bigger and more stylish than before, and if you go for a top-spec version you’ll find a price tag that nudges the Santa Fe towards the hard-fought premium SUV market.

For its first test, we’ve picked the seven-seat Premium 4WD model, which costs £30,195. For that, you get a raft of standard kit and plenty of family friendly touches, all wrapped up in a handsome new look.

To test the latest Santa Fe’s premium aspirations, and see if it really can compete with luxury models, we’ve lined it up against the entry-level Volvo XC90.

Our third contender is the Chevrolet Captiva, which also has seven seats, a punchy 2.2-litre diesel and plenty of standard equipment.

Has Hyundai bridged the gap between practical and premium SUVs? Read on to find out...

Hyundai has done a great job with the new Santa Fe. It’s better looking than its predecessor and has definitely seen a step up in quality. And if you want a comfortable and imposing SUV, you can’t go far wrong with this car.

The latest Santa Fe is certainly far better than the Chevrolet Captiva. It has a more upmarket feel than the Chevy, and matches it for standard kit, plus it’s cheaper to buy and run, although both models come with five-year waranties.

However, it’s not all good news for the new car. The rearmost seats are very cramped and it doesn’t drive as well as the company’s smaller i10 and i30 models. Plus, there’s no denying that £30,000 is a lot of money to spend on a Hyundai. For most buyers, the entry-level 2WD Style model will be the best bet – it’s almost as well equipped, yet costs £3,300 less and will be cheaper to run.