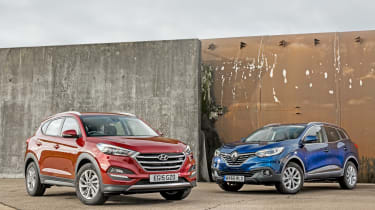 Over the years, Hyundai has evolved from being a worthy budget brand to one that makes a number of front-running cars in their classes. The likes of the i10, i30 and Santa Fe have pushed sales to new levels, and the firm’s five-year warranty is a great buying incentive.

• Best crossovers to buy right now
The Santa Fe is a case in point: it’s grown in size and quality, and is now one of the best seven-seat SUVs you can buy. In an effort to build on this success, Hyundai’s introduced the all-new Tucson. The name appeared in the UK from 2004-2009, but now returns to replace the ix35 badge. Its looks are inspired by the Santa Fe, but can it emulate its big brother and become a stand-out compact SUV choice? 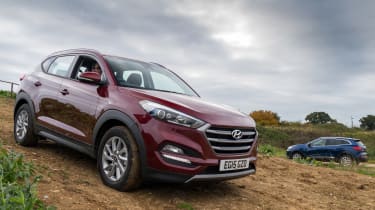 To find out, we’ve lined it up against another recent newcomer that’s made a big impact in the class – the Renault Kadjar. The new model has the measure of the related Nissan Qashqai, and its combination of value, quality and practicality means it’s a tough rival for the Tucson to take on.

The Kadjar has a bigger boot, at 527 litres, compared to the Tucson’s 488-litre capacity. Yet while the Renault features a false floor with added storage underneath, the Hyundai comes with a full-size spare wheel. For some buyers that will be enough to justify the smaller boot, although Renault does offer a space-saver spare for £95. 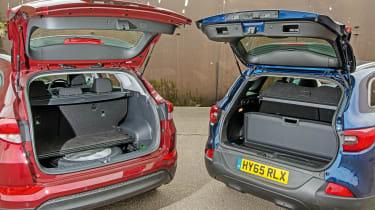 These cars aren’t really designed for off-road use, but higher-spec versions are available with 4WD. Intriguingly, the front-wheel-drive Tucson still features hill descent control. Simply press a button next to the gearlever, and the electronics limit the car’s speed on steep slopes.

The standard Kadjar 1.5 dCi has the Tucson beaten for emissions, but company car buyers can cut their Benefit in Kind bills further by specifying 17-inch wheels. Not only does this reduce emissions to 99g/km, it gives the Kadjar a comfier ride. 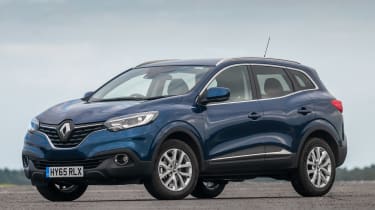 It’s two out of two for the Kadjar, as it sees off the Tucson. Renault really has found its feet in the crossover class, and this car offers more space and a smarter cabin layout. It’s well built and drives reasonably well, while lower running costs make up for the diesel’s slightly poorer performance. The standard car rides well, but the 17-inch wheels are a no-brainer for company car users. 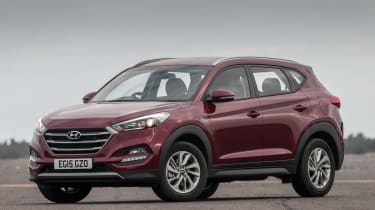 The Tucson brings the Santa Fe’s family face to the compact crossover class, but, apart from that, it’s much like the old ix35. That’s no bad thing, as it’s well built and has decent kit, but in a class where the competition is so intense, it’s treading water rather than making an impact on the front-runners. Poor emissions are a letdown, although the five-year warranty helps compensate. 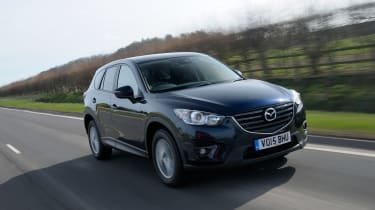 There’s no shortage of class rivals, and the CX-5 is a great choice if you want low running costs and a sharp drive. The base SE-L Nav is pricey, but company car costs are well matched to the Hyundai’s, at £1,047 for lower-rate taxpayers. 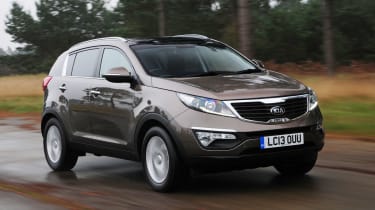 If the Hyundai’s warranty appeals, then why not get two more years with Kia’s cover? The Sportage isn’t very efficient, but as it’s set to be replaced in 2016, expect discounts – even on this Axis special with two-tone leather and sat-nav.