Infiniti Project Black S draws on Renault F1 knowhow for aero design and hybrid systems, and hints at sporty specs on the way 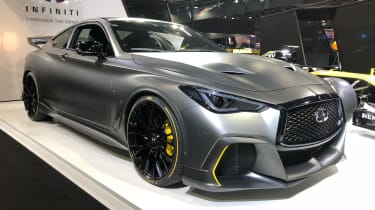 Infiniti has displayed its Project Black S concept at the Paris Motor Show, with the marque hinting that its latest concept car could inspire future sports models and super-complex hybrid powertrains. The Infiniti Q60-based coupe first made its debut at the Geneva Motor Show, but is being shown again in Paris with a few subtle tweaks and hybrid tech inspired by Formula 1 power units.

The Infiniti Project Black S links to the Renault F1 team through the Renault-Nissan-Mitsubishi Alliance, which has enabled Infiniti to apply some motorsport know-how to the performance coupe. It makes use of two different types of energy recovery to charge its hybrid system: MGU-K (Motor Generator Unit - Kinetic) which recovers energy that would otherwise be lost from braking, while the MGU-H (the ‘H’ stands for ‘Heat’) recovers waste heat energy from exhaust gases. This allows the Q60 to charge the batteries even under acceleration.

Petrol power comes courtesy of the 3.0-litre twin-turbocharged VR30DDTT engine that’s already used in versions of the Infiniti Q60 and the Q50 saloon. The combustion engine alone makes 400bhp, while the hybrid assistance bumps the total output to 563bhp. Predictably, performance is brisk: Infiniti hasn’t released precise performance figures yet, but 0-62mph is estimated to be below four seconds.

Keeping the performance in check is an aero package which again draws knowledge from the Renault F1 team. It’s most obvious at the rear, where the dual plane wing, according to Infiniti, closely resembles its F1 car’s low downforce configuration, used at high speed circuits like Monza.

At the front, the Q60’s standard bumper is replaced with a much more aggressive design. A deep front air dam is flanked by a pair of intakes, while an extended front splitter balances out the front downforce against the rear wing. Each of the major aerodynamic elements are singled out with subtle yellow highlights. The look is completed with deep bonnet vents, and a set of black alloy wheels. Unfortunately you can’t buy it, as for now the Project Black S is just a concept. However, Infiniti has hinted at the potential for a new model grade that offers "progressive levels of product enhancement, above and beyond the existing Sport specification.

"This could include higher power, torque and performance from innovative powertrains, new or uprated suspension systems and unique design elements," says Infiniti. This would suggest a rival for cars like the forthcoming BMW M340i, which is likely to get both sportier styling as well as an tweaked engine, brakes and suspension over the 3 Series on which it is based.

Would you be interested in a performance Infiniti? Let us know in the comments below...