The Infiniti QX70 is part-SUV, part-coupe, and comes with a range of powerful V6 and V8 engines 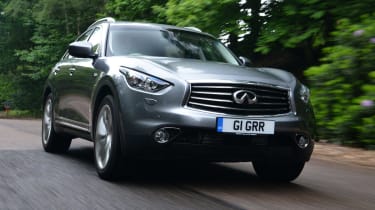 Nissan’s luxury division Infiniti has been in existence since 1989, but it only arrived in the UK in 2009.

The range comprises luxury saloons and crossover SUVs, and a change to the brand’s naming strategy has seen the full-size FX SUV rebadged the QX70 for 2014.  A crossover indeed, the QX70 is a performance-oriented car, which we'd place somewhere between the status of SUV and coupe.

It's got a range of powerful engines to back it up, but be careful; the powerful V6 and V8 petrol units will mean running costs soar. The QX70 provides stiff competition to the likes of the BMW X6, and while it's not as practical as a Range Rover Sport or Porsche Cayenne, it handles well and masters corners with ease.

The Infiniti QX70 has a distinctly sporty driving position, – it’s the first thing you notice when you climb inside. You sit low in the car with the steering wheel high and straight ahead of you, although when you look out you’ll see that you’re still positioned quite high when compared to other road users.

All models come with an effective seven-speed automatic gearbox, which changes through gears smoothly. Those wanting to take control themselves can do so by utilising the paddles mounted behind the steering wheel. There’s nothing wrong with the way the transmission shifts, it’s just that longer gears don’t make the most of the QX70’s power band – making the car slow to respond.

In corners, the Infiniti’s stiff suspension means there is next to no body roll, and wide tyres provide plenty of grip, too. But the QX70 can’t hide its high centre of gravity, and it’s not that pleasant to hustle along twisty B-roads because it’s so wide and visibility is limited.

Unfortunately, that stiff suspension combined with large wheels and low-profile tyres means the QX70 fidgets and thumps over all road surfaces and only really works well on the smoothest tarmac. However, road noise is reasonably well supressed,and wind noise is kept to a minimum, too.

One shortcoming is the QX70’s off-road ability. It just about copes with tracks and grass fields, but a lack of low-range gears or adaptive off-road modes, as well as low-profile tyres and sports suspension set-up, means it’s not really suited to rough conditions.

This isn't a strong point for the Infiniti QX70. Its big dimensions and heavy weight don't help things, and nor do the thirsty engines. Both petrol engines manage just over 20mpg which means that, on an average day, you're likely to achieve something along the lines of 12/13mpg. The least efficient, unsurprisingly, is the top-of-the-range S Premium model, which emits a whopping 307g/km of CO2.

That means both petrol models will cost nearly £1,000 for their first year of road tax due to high emissions. The diesel is only a bit better; it manages 32.8mpg and emits 225g/km of CO2. Overall, the Infiniti QX70 will see you spending a lot of time at your local petrol station, which is probably why you hardly see any on the road.

The Infiniti QX70 takes a sportier crossover approach to the large SUV class, with brash, muscular styling and a bold chrome grille - redesigned to include Infiniti's latest family look. From some angles, the Infiniti is cartoon-like in its proportions, with massive 20-inch alloys wearing low-profile tyres, plus bulbous wheelarches and a low roofline.

At the back, the rounded rear looks low and wide compared to its rivals here, and the small windows and low roof compromise interior space. The only nods the QX70 has to off-roading are the silver roof rails and slender black plastic wheelarch extensions, although the latter were well hidden next to our car’s metallic black paintwork.

Climb inside, and there’s a sporty ambience. The diamond-stitched leather seats feature electric adjustment and are heated, too, while the driver gets a sporty looking instrument binnacle that’s similar to the one you’ll find in the Nissan 370Z.

The QX70 takes switchgear from elsewhere in the Infiniti and Nissan ranges, although unfortunately that means quality isn’t up to the same standard as rivals such as the Volkswagen Touareg. Sat-nav is standard on Premium models, but  the quality of the graphics is poor compared to rivals.

In the back, the dark-tinted windows are small and the black cabin can feel a bit claustrophobic, while the low roofline means space in the Infiniti is limited.

Those sporty lines might look great, but they don’t do practicality many favours. The boot is pretty small for such a large car, and a capacity of 410 litres isn’t much bigger than you’ll find in a compact hatchback. You do get a powered tailgate, though, and there are levers in the boot that make folding the back seats a breeze. With these folded, the QX70 has an impressive 1,305 litres of boot space.

In the back, the two outer seats are heavily sculpted, so the middle seat feels like a perch in comparison. There isn’t much space, either, although the roof is sculpted to create more headroom.

Up front, electric seat and wheel adjustment mean it’s easy to get comfortable. However, no matter what position you set, your view is restricted by the small glass area, narrow back window and thick rear pillars. Things are helped by a suite of cameras fitted to front, back and sides of the QX70, though.

The Infiniti QX70 was awarded the full five stars in the Euro NCAP crash safety tests, thanks to a generous number of airbags and a range of hi-tech gadgets. Intelligent Brake will help bring the car to a halt without the driver's intervention, while lane keep assistant will brake the inside wheels to prevent the car from straying out of its lane.

Infiniti is part of the huge Nissan empire, and it shares engines, transmissions and electronics with other models from across the globe. Not enough Infinitis have been sold in the UK for the manufacturer to make an impact on any driver satisfaction surveys, but it has a decent reputation in surveys in the US, where it’s an established brand.

One highlight of Infiniti ownership is the personal service that’s provided by its dealers. There are currently only nine franchises across the country, but if you book a service, a driver will collect your car and leave you a courtesy car for the duration, so you suffer the minimum of inconvenience. 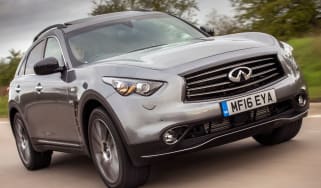 Luxurious touches might be in the new Infiniti QX70 Ultimate's favour, but little else is
Infiniti reveals teaser for ‘limit-pushing’ concept car 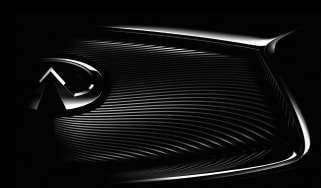 Infiniti will bring a bold new concept car to the 2014 Paris Motor Show, thought to be a new Porsche Cayenne-fighting 4x4
Jeep Grand Cherokee vs rivals 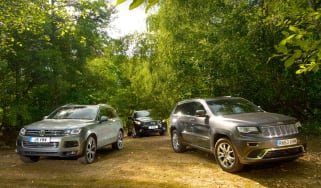 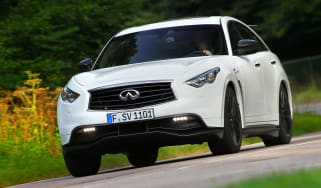 Our verdict on the Infiniti FX Vettel, which gets sporty tweaks and input from the F1 world champion
Infiniti FX vs Range Rover Sport 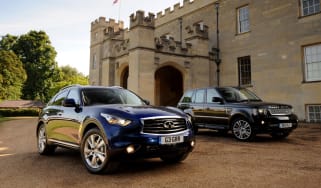 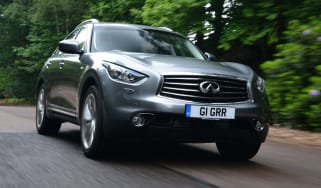 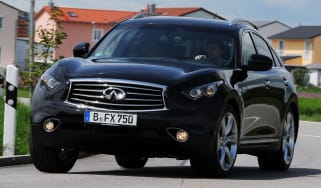 The Infiniti FX has been updated but the tweaks are only skin deep. Should it have done more?
2012 Infiniti FX revealed 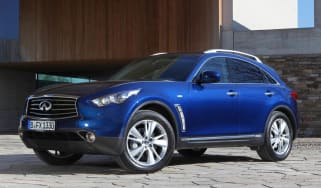 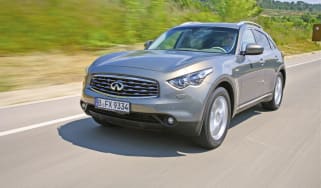 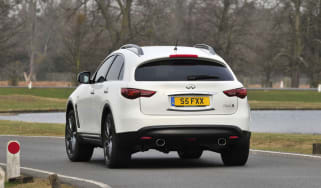 Special version of SUV is here... and we've driven it
Infiniti FX50S 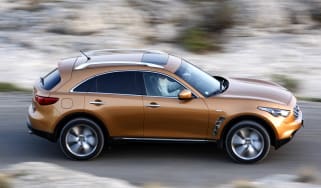 Flagship SUV packs a 5.0-litre V8, every luxury imaginable and has the BMW X6 in its sights
Infiniti FX45 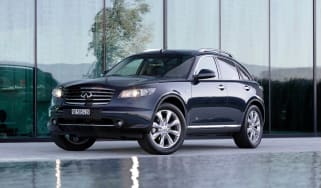 You may not recognise the badge, but Nissan's new luxury brand is serious about beating BMW and Mercedes.
Skip to HeaderSkip to Content