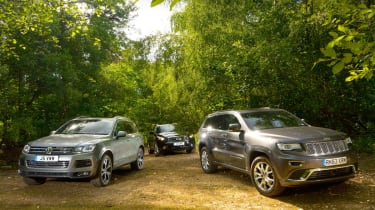 US off-road specialist Jeep has a long history of producing tough 4x4s that dates back to World War II. These days, though, it’s just as famous for building luxury off-roaders that are still supremely capable in the rough.

The Grand Cherokee is the flagship of the Jeep range, and has recently been given an update. The top-spec Summit model tested here is packed with kit, but it hasn’t ignored its off-road roots. So how does the newly revised Grand Cherokee measure up?

There are plenty of tough opponents in this class, and we’ve picked two very different cars for this test. The Volkswagen Touareg delivers similar off-road ability to the Jeep and the 3.0 TDI diesel has plenty of pulling power.

Our second rival is the Infiniti QX70. The company’s biggest SUV is biased towards road use, but offers plenty of standard kit. So can the Grand Cherokee deliver a peak performance? Or will it struggle to make an impact here?

Click on the links above to read each review, then read on for our verdict.

The Jeep is the biggest car here, but that doesn’t mean it has the most spacious interior. The VW offers more back seat room, and there’s more space under the retractable load cover, too.

Add air-suspension to the Touareg and you can lower therear of the car by 60mm to help loading. The Jeep lowers all four corners by 40mm. The Infinitihas the smallest boot and a more cramped interior than either rival.

Control panels in the Jeep and VW allow you to select a drive mode according to surface conditions, such as rocks, mud or snow. These tailor the car's electronics, diffs, ride height and auto gearbox to suit. There's no such set-up in the Infiniti; it just gets a Sport mode for the dampers

The Touareg has a slight edge over its rivals as it's less expensive to buy, and VW offers fixed-price servicing to help keeps costs down. The car returned identical economy to the Jeep on test, although if you do more urban driving, the Touareg BlueMotion Tech's stop-start is likely to boost economy further.

The Touareg is still an excellent choice if you want a family friendly five-seat off-roader. This R Line model isn’t quite as well equipped as the top-spec Grand Cherokee – we’d recommend adding air-suspension – but has a decent level of kit, plus it’ll cost you less to buy and run. Add in excellent build quality and a comfortable and refined driving experience, and VW has a winner.

There's a lot to like about the Grand Cherokee. The all-American looks won't be to everyone's tastes, but at least it doesn't fit the standard Euro SUV mould, and this Summit model is absolutely packed with kit. While cabin and boot space could be better, and it's not the sharpest car to drive, if you want a relaxing luxury SUV with a difference, it's well worth a look.

If off-road ability is a priority, the QX70 isn't for you. However, as a sporty crossover, it performs pretty well - although there's a price to pay in the form of the car's firm ride. Generous standard kit is another bonus, but there's no avoiding the fact that in this company, the Infiniti is cramped and costly to run, while the cabin quality isn't quite up to the same standard.