The Trailhawk model is the Jeep Grand Cherokee at its toughest and most off-road focused. Does it make sense for UK buyers? 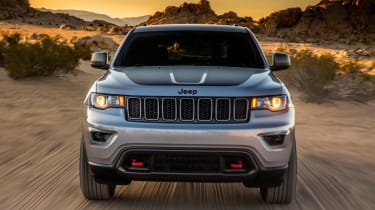 The Jeep Grand Cherokee Trailhawk is undeniably impressive at what it’s been designed to do. It’ll clamber across terrain that many premium SUVs would seriously struggle with, but while that may hold some appeal to the US market, it’s something of a niche interest for British buyers. The standard Grand Cherokee offers all the off-road capability you would need and is better value, too.

We already know that the standard Jeep Grand Cherokee’s rough terrain capability is a match for any in the premium SUV class. So what’s the point of this new ‘Trailhawk’ version then, which claims to be even more adept when the going gets filthy?

Think of Jeep’s Trailhawk moniker – already found on the Renegade and Cherokee – along the same lines as you would Porsche’s 911 ‘GT3 RS’ tag and it starts to make more sense. While each badge is catering for completely different needs, both aim to take an already capable car to another level, for buyers who desire the highest levels of performance on track or - in the Jeep’s case - off-road.

As such, the Grand Cherokee Trailhawk has a number of revisions to make it less of an all-rounder and more of a focused off-roader. For starters, there are chunky Kevlar-enforced Goodyear Adventure tyres, as well as retuned air suspension that offers more ground clearance and improved axle articulation. 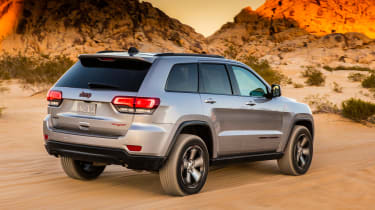 Jeep has also beefed up its off-road wizardry for the Trailhawk, adding ‘Selec-Speed Control’, which is a form of low-speed, off-road cruise control. That adds to the usual batch of features including a five-mode terrain selector, rear limited-slip differential and hill descent control. Jeep has also added a suite of off-road instruments to its U-Connect infotainment system, showing information such as axle angle and oil pressure. 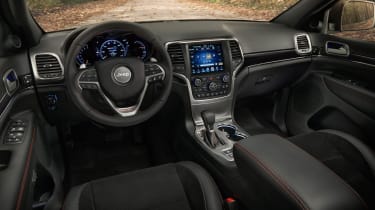 Our on-road test of the Grand Cherokee Trailhawk was limited to Nevada highways, but in that time we were surprised by the lack of road roar from the specialist tyres. Wind and engine noise are still the dominant intrusion at speed, just as they are on the standard car.

We were also only able to try the 282bhp 3.6-litre V6 petrol engine, which won’t be sold in the UK and suffers from a lack of refinement along with a noticeable torque deficit compared to more modern turbocharged units. The Trailhawk will be mated with Jeep’s smooth 3.0-litre diesel engine when it arrives here, and that should help it make a much better case for itself. 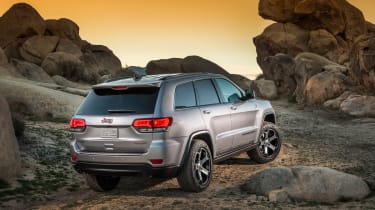 Most of our time with the Grand Cherokee Trailhawk was spent tackling some of Nevada’s harshest desert terrain, where it understandably excelled. The increased ground clearance in Rock mode means there’s far less risk of it bottoming out, while the Sand setting keeps the revs high to maintain momentum. There’s no doubting that it would leave a BMW X5 or Volkswagen Touareg for dead out in a rocky desert, but is that really relevant to British punters?

Back on the road, the Trailhawk is outclassed by newer rivals when it comes to ride and handling. Most SUV alternatives can tackle a muddy field, too, but benefit from far superior road dynamics than anything the Jeep can serve up. It’s is behind the best at this price for interior quality and efficiency, too. If you are seduced by the Grand Cherokee’s all-American charm, we’d recommend forgoing Trailhawk spec and opting for the base (and hardly sparsely equipped) Limited Plus model.