Latest top-spec Summit version of the evergreen Jeep Grand Cherokee SUV scores on comfort, kit and refinement, but will it be a hit? 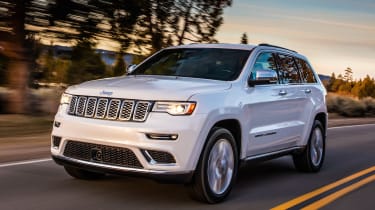 By continually tweaking the Grand Cherokee over its lengthy life, Jeep has kept it surprisingly competitive in what is a crowded and talented market. Yes, you can buy a more desirable and more engaging car for the cash, but you’re unlikely to get quite such an upmarket and well kitted-out interior as you will with this Summit model. The plush and practical Grand Cherokee remains a refreshingly different SUV, in fact, even in its latter years.

In SUV terms, the Jeep Grand Cherokee is in its dotage. Launched the best part of seven years ago and facelifted a while back, it’s under assault from an increasing number of new challengers in a seriously competitive (and lucrative) part of the market. It faces an uphill battle to make it on to buyers’ consideration lists, in fact, as high-spec SUVs continue to blur the lines between luxury and mainstream.

Yet owners love their Grand Cherokees. The car scored highly when it last appeared in our Driver Power satisfaction survey, and the brand managed an impressive third place in this year’s dealer round-up. Jeep keeps improving the Grand Cherokee, too, as this latest version of the top-spec Summit model proves. Auto Express was invited to the US to take a drive in this 2018 car, and left impressed with how much it has changed in its lifetime.

The Summit competes with some of the best models in this class for interior quality, tech and refinement. But when it comes to ride, handling and efficiency, it’s the same old Grand Cherokee: distinctly average. Some things just can’t fight the onset of age, and the big Jeep is one of them. 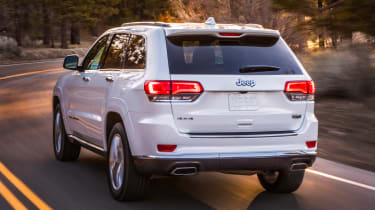 Let’s start with the good stuff: Jeep hasn’t just piled on the extras. It has worked really hard instead on the car’s perceived quality, as well as the refinement. Everything from the way the doors close to the materials on the dash is unrecognisable from the car we drove at the beginning of the decade. The marginal gains make a big difference here.

Aside from the HEMI-powered SRT V8, the Summit continues to sit at the top of the range and offers more kit and quality than the lesser Limited and Overland models. Despite the high list price, if you opt for one of Jeep’s attractive PCH hire schemes (and are prepared to stick to the stingy 8,000-mile-per-year limit), you can have a Summit for £479 per month. A similar deal on a BMW X5 will cost you almost double that.

There’s rather nice leather on the seats and elsewhere around the cabin, Alcantara on the roof lining, an easy-to-use 8.4-inch touchscreen with navigation, Apple CarPlay and Android Auto, plus a beefy (and bassy) 19-speaker Harman Kardon audio system. 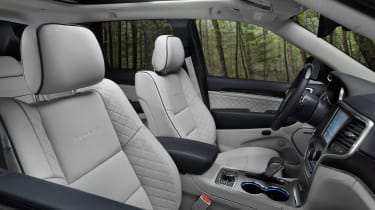 You want more? The car will park itself, as well as offering adaptive cruise, a panoramic glass roof and a decent roster of safety tech. And everything you want to be electrically operated is, even if you don’t need it to be.

Engineers have also added Active Noise Cancellation and acoustic glass to make this car really quiet on the move. The 3.0-litre V6 diesel is a familiar unit now, and isn’t a strong point. In our experience it can be quite vocal, so it’s a good job there’s that noise cancellation technology to keep the din to a minimum. It’s actually quite quiet inside this new Summit model.

By today’s standards, the Grand Cherokee’s 247bhp and torque of 570Nm are just about adequate, while the official 8.2-second 0-62mph time and claimed 40mpg fuel economy fall into the same category. There’s no four-cylinder model and no hybrid, either, which shows the Jeep up against faster and more frugal rivals. The eight-speed auto gearbox isn’t especially quick to respond, but take it easy and it slips happily between ratios.

However, it’s the chassis’ dynamics that really give away the car’s age. The big 4x4’s ride is best described as lumpy, even on our Grand Cherokee’s standard air suspension, while the worst surfaces will still make you wince. This isn’t likely to improve on roads back in the UK, either.

There’s a fair degree of body lean if you corner eagerly, although the slightly slack steering won’t encourage you to do so. That’s fine if you want to go off road – and previous experience has told us this car will head far further than most over some pretty inhospitable terrain. But newer SUVs, such as the Range Rover Velar and Jaguar F-Pace, are more responsive and feel more wieldy on UK streets.

That newly trimmed interior offers a decent amount of space for five people, with good luggage room, too, thanks to the huge 782-litre boot. Of course, the tailgate is electrically powered like everything else, although there’s no seven-seat option.

The rugged good looks of the Jeep Grand Cherokee have been enhanced by adding xenon headlamps, LED daytime running lights and a set of fancy 20-inch polished alloy wheels, but an Audi Q7 S line is still cheaper to buy with all this kit and more. 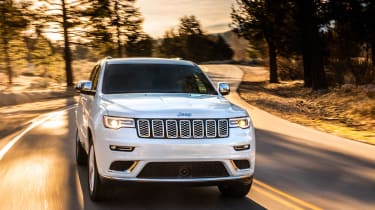 Click on the gallery above to see more of the Jeep Grand Cherokee Summit...