We get behind the wheel of the Grand Cherokee SRT, which is powered by a 461bhp 6.4-litre Hemi V8 engine 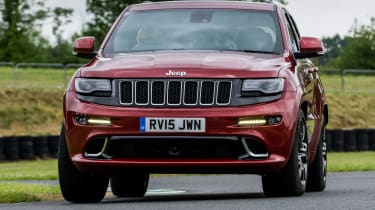 The SRT packs plenty of feel-good factor, with a gargantuan V8 snorting away under the bonnet and its bold and brutish American styling. But even the relative value and decent practicality of this hot Grand Cherokee can't take away from some better rivals. Nearly £64,000 is a lot to pay and it doesn’t drive well enough or feel special enough inside compared to the standard version.

Think of a performance SUV and the Porsche Cayenne and BMW X5M might pop in to your head, but have you ever considered the Jeep Grand Cherokee SRT?

The Jeep Grand Cherokee SRT adds an American flavour to the fast off-roader market by using a blend of technology and brute force to deliver high-octane thrills and SUV practicality.

Jeep’s Street and Racing Technology team has added a huge 6.4-litre HEMI V8 to Jeep’s flagship off-roader, so it now produces 461bhp and can sprint from 0-62mph in five seconds – that’s not bad for a car that weighs almost 2.5 tonnes. 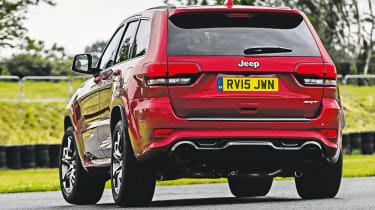 Put your foot to the floor and this burble becomes a full-on roar as the engine unleashes all 461bhp. However, while the Grand Cherokee might talk a good game, its ability tells a different tale, even if you switch the rotary controller to Sport or Track.

The 2,418kg Jeep is pretty hefty, and even though it has adjustable suspension the body control isn’t tight enough. In the softer settings the ride is comfortable but the body is never able to settle over undulating surfaces; in Sport, potholes and bumps thump through the chassis, upsetting the SRT’s cornering line.

Add in slow steering and the fact there isn’t much feedback through the wheel, and you have a car that really has to be muscled through bends, which isn’t enjoyable. The noticeable amount of body roll induces a further feeling of insecurity. 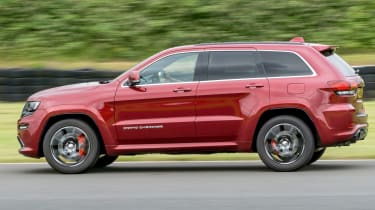 However, there’s no denying the effectiveness of the Grand Cherokee’s engine. Our performance tests show it sprinted off the line and on to 60mph in 5.3 seconds.

The gearbox has eight ratios to use, so each one is fairly short, which gives the SRT good in-gear acceleration, even though the box becomes decidedly jerky under such treatment. Still, the upgraded Brembo brakes deliver decent stopping power, even if the pedal feels spongy.

But even if you don’t hear it coming you’ll definitely see it. A handsome design means the regular Jeep Grand Cherokee is a good base to start from for a pumped-up performance off-roader, and this SRT model wears its styling modifications well. 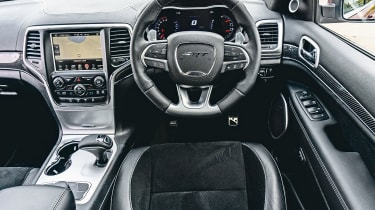 The first thing you notice are the deeper bumpers, flared wheelarches and gaping vents in the bonnet; along with the 20-inch alloy wheels, slim headlamps with LED running lights and Jeep’s trademark seven-slot grille, they give the SRT a menacing appearance. There’s also still a Stateside look to the Jeep thanks to its proportions and square-set stance.

At the back end there’s a pair of tailpipes that hints at the performance on offer. Further neat exterior details include chrome inserts for the front and rear bumpers, and the grille and window line.

There’s no doubt it’s an imposing car on the road, but the SRT’s sporty side is less noticeable from the inside. The basic layout and materials used are similar to those in lesser Grand Cherokees, although there are a few racier touches splashed around the cabin – including some carbon fibre dash inserts. 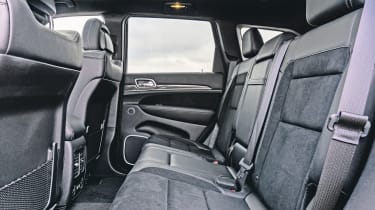 As you might expect from a 6.4-litre V8, lugging around just under two tones of high-performance SUV, fuel consumption in the SRT is terrible. Jeep puts the official figure at 20.1mpg and that’s despite a system that shuts off half of the engine’s cylinders under light throttle loads.

But the astronomical fuel bill doesn’t seem as bad when you consider a Porsche Cayenne Turbo – which is only three-tenths quicker from 0-62mph – costs nearly £30,000 more than the SRT’s £63,995 price-tag. The SRT will depreciate quickly, too – our experts predict the Grand Cherokee will hold on to only 31.7 per cent of its new price after three years. It’ll lose a sizeable £43,696 of its value.

And everything you could ever ask for already comes as standard on the Jeep including part-leather seats, a dual-pane sunroof, a 19-speaker stereo, sat-nav and adaptive cruise control. The only thing missing is the genuine sense of luxury that you get in other European SUVs; the Grand Cherokee still has a few cheap feeling areas in the interior. 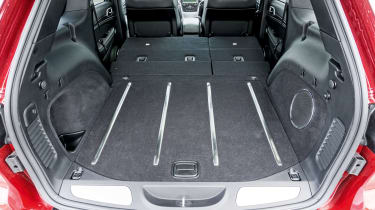 In terms of interior space, the Cherokee is still a great proposition thanks to its boxy body. With the rear seats up the Jeep offers 782 litres. Fold them down and the maximum luggage capacity stretches to 1,554 litres, plus the SRT’s massive width means the square opening is very useful. The button for the electric tailgate is mounted in an odd place inside the boot, though, next to the handy LED torch.Cabin storage is strong. There are two cup-holders next to the gearlever, decent-sized door bins and a good glovebox. You also get extra room under the boot floor and no loading lip, but the load cover sits quite low beneath the window line.