Luxurious touches might be in the new Infiniti QX70 Ultimate's favour, but little else is 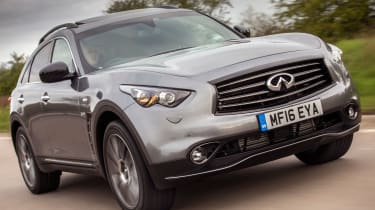 If exclusivity is your thing, then you’ll like the QX70 – especially in this laden-with-goodies Ultimate trim. Otherwise, there is no end of other SUVs that are more talented, more spacious and better value. In the fast-moving SUV market, this Infiniti is showing its age and should be heading for retirement.

There are some things Infiniti is very good at. The paint finish of its cars is always superb and especially luscious on the QX70, its windscreen wipers are eerily silent and you’re guaranteed exclusivity, as an Infiniti – any Infiniti – is a rare sight on UK roads.

But that’s where the good news ends. It’s a car that’s way past its sell-by date, and not one that can be improved with a sprinkle of glitter. 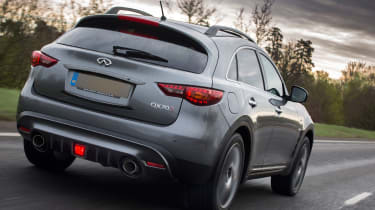 You’ll pay £52,810 plus another £760 for the lovely Graphite Shadow metallic paint of our test car. Though there’s nothing else on the options list – but by today’s standards you’ll be searching pointlessly for things like DAB radio and a panoramic sunroof on the otherwise fulsome kit count. This is far from the cutting edge of tech, and it’s not surprising when you realise the car was first seen eight years ago.

Under the long and shapely bonnet is a 3.0-litre V6 diesel with not much to shout about. Shout it will, however, as it’s continues to rumble away whatever speed you’re doing. Fuel economy isn’t bad, though, and we were only a few miles per gallon away from the claimed 32.8mpg average. 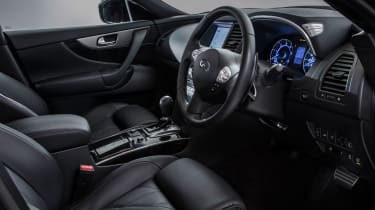 Despite its SUV guise, there’s nothing sporty about this sports utility vehicle. The steering is too heavy, and while body control is good, the throttle response is tardy and the ride is quite frankly awful.

Inside, some nice purple stitching lifts the darkness – not helped by the shallow windows – but the quality isn’t much better than on a top-spec Nissan Qashqai. Space in the back and the boot is surprisingly poor given the size of the car, too.

The new Q30 shows that there are brighter times ahead for Infiniti. But with rivals like the Jaguar F-Pace and Volvo XC90 offering so much more talent for less cash – even in Ultimate guise the QX70 is impossible to recommend.