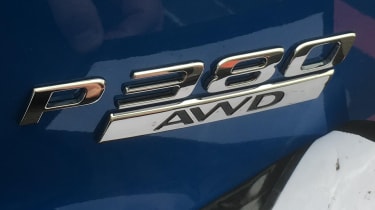 All Jaguar Land Rover cars are to get new model designations to more easily identify their fuel types and power outputs. The changes will be rolled out with 2018 model year cars in the next few months, although the new Range Rover Velar has already adopted the new format.

Eagle-eyed Auto Express reader Don Etchells spotted an F-Type on test that was revealing its new P380 AWD badging. The P stands for petrol, while the 380 refers to the power output in horsepower. Similarly, the new 2.0-litre four-cylinder model will be badged P300.

The Range Rover Velar range kicks off with a D180 diesel model, with the range topping model badged P380 using the same supercharged 3.0-litre V6 engine as the F-Type.

With the Jaguar I-Pace launching next year and plug-in hybrid versions of the Range Rover and Range Rover Sport announced at the recent Frankfurt Motor Show, it means a further designation will be used for these models. So expect the initial 395bhp I-Pace to be badged E400.

Audi also recently announced changes to its model designations, but using a nomenclature that is less clear than Jaguar Land Rover's plans. Instead, Audi has chosen a range of non-related numbers to apply to a car's power output, that will be added to the existing engine designations such as TFSI and TDI. Audi's new naming system will be applied to the company's growing range of plug-in hybrids and new electric vehicles as well as conventionally powered models. All new Audis will feature the new nomenclature from next summer.

What do you think of the JLR model name shift? Let us know in the comments...