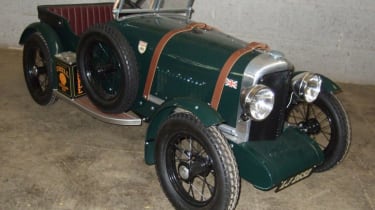 In an effort to create space for the expansion of its Jaguar Land Rover Classic division, JLR is selling its reserve fleet of cars and amongst them are 140 children's pedal cars from its range of vintage toys. This is by no means the extent of the firm’s pedal car collection as the marque is only selling models that don’t feature JLR branding.

Of the 140 vehicles that will all be auctioned without reserve at Bicester Heritage on 21 March, there are representatives from almost every decade of the past 130 years of motoring. Standout cars include a miniature Batmobile, pre-war styled racers and a BMW Z4. Also included in the range is a selection of vintage biplanes (models of course) and a pedal car designed to look like a steam train.

• How to choose the best kids' ride on car

What’s more, these are not the kinds of toys you can simply pick up from your local Argos. Many of the vehicles shown come with features you would only expect on full size cars, such as steel bodies, brakes, opening bonnets and boots, fully functioning steering, headlights, adjustable pedals and even leather seats. In some cases, the only thing to split these miniature hommages from the real thing is the lack of an engine. 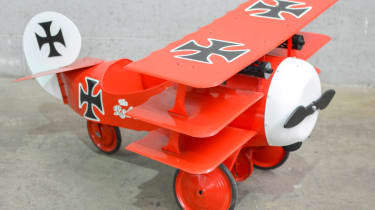 One of the main reasons the JLR Classic pedal cars will be rolled across the block, is that the department is hoping the sale of these models will create more room for its special projects, such as the Jaguar and land Rover ‘reborn’ models. Cars previously launched Jaguar Land Rover Classic include the Jaguar E-Type Lightweight and the reborn Land Rover Defender with 5.0-litre V8 power.

• Best toy cars for boys and girls of all ages

Tim Hannig, Director of Jaguar Land Rover Classic said, “[The sale of the models] will allow us to focus on exciting initiatives including; ‘Reborn’ versions of Range Rover and Jaguar E-type, ‘Works Legends’ cars for sale and the ‘Classic Collection’ - iconic vehicles cared for by a team of specialists at the new ‘Classic Works’ facility in the UK.”

Which car did you yearn to have a miniature version of when you were a kid? Let us know in the comments below...