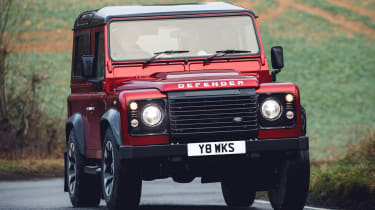 The iconic Land Rover Defender went out of production two years ago, but it’s not quite dead yet. To mark the company’s 70th anniversary this year, it’s launching the fastest and most powerful version it’s ever produced.

The Defender Works V8 is a special model from the Land Rover Classic division, limited to just 150 examples. Starting at £150,000 – or £45,000 more than a Range Rover V8 Autobiography – it’s the first V8 Defender that Land Rover has produced for 20 years.

The Works V8 is a comprehensively re-engineered Collector’s Edition that features a 400bhp 5.0-litre naturally aspirated V8; a far cry from the 120bhp four-cylinder diesel engine traditionally offered. Paired with an eight-speed ZF auto box that includes a sports mode, it will fire the SUV from 0-60mph in a scarcely believeable 5.6 seconds, and on to a limited top speed of 106mph.

Say hello to the most powerful #LandRover #Defender ever built. This is the 400bhp Works V8... http://aex.ae/2B7LAV1

Both short-wheelbase 90 and long-wheelbase 110 versions of the Works V8 will be available. Alongside the new engine, the work extends to fitting uprated brakes, exclusive 18-inch alloy wheels with all-terrain tyres and a handling kit, which includes bespoke springs, dampers and anti-roll bars.

The Defender’s rugged, go-anywhere nature hasn’t changed. As such, the Land Rover still features permanent all-wheel drive with a two-speed transfer box, as well as heavy-duty front and rear differentials. The Works V8 retains live axles front and rear, too. 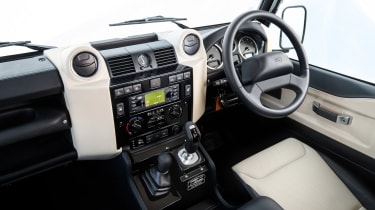 Other than the wheels, the exterior is almost entirely faithful to the standard model. Eight body colours are available, including two satin finishes, with a contrasting black roof, wheelarches and front grille. The door handles, fuel filler cap and bonnet lettering are all finished in machined aluminium, while Bi-LED headlights have also been added.

Inside, leather Recaro sports seats feature, plus the dashboard, door panels and headlining are trimmed in leather. Land Rover Classic has fitted its own infotainment system as well.

A number of high-performance Land Rover Classic upgrades have been launched for existing Defenders, too. These include a diesel power boost, plus uprated suspension and brake kits.

What do you think of the Land Rover Defender Works V8? Let us know below…