"Jaguar Land Rover designers and engineers show they can deliver"

JLR can climb back from the brink if its engineers are given clear direction, says John Mcllroy 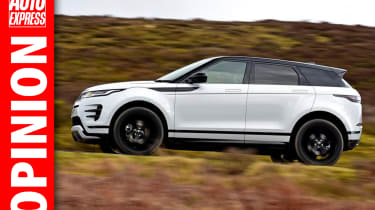 Another tough news week for Jaguar Land Rover, then, as the British company posted a quarterly loss of £273million compounded (and then some) by write-downs on the value of various investments. The total figure in the red, for just the last three months of 2018, was a staggering £3.4billion.

And yet there should be hope. As you’ll read from our early ride impressions of the all-new Evoque, JLR can still produce great cars. The second generation of the genre-making small SUV is more like a true baby Range Rover than its predecessor ever was.

• Our first ride in the new Range Rover Evoque

It does also feel, though, like a vehicle that will sit in parallel with where the customer and legislative trends are going, instead of being bang on message. Because while there’s mild-hybrid tech across the range, a proper plug-in version isn’t likely to be around until next year. And don’t even ask about an all-electric edition.

As a result, the (excellent) Jaguar I-Pace EV is looking an increasingly isolated offering in JLR’s range – particularly when the VW Group behemoth is lining up more than a dozen pure-electric cars in the next couple of years. It’s not a question of scale, either, as Volvo, another relative minnow, has hybrid stitched into its range, including SUVs – today, not in 18 months’ time.

Jaguar Land Rover chief Dr Ralf Speth recently told analysts that the firm has taken “every action” and “not stepped away from tough decisions”. But the fact is that while some of his company’s problems must be attributed to the volatile Chinese market, it is also suffering because it has been too slow to be brutal about costs, positioning investment and reacting to the shift away from diesel and towards electrification.

Models like the Evoque show that when JLR’s designers and engineers are given clear direction, they can deliver. But the more the struggles continue, the more questions will be asked of those plotting the course.

How do you think the future looks for JLR? Let us know in comments...