Automotive heavyweights are lagging behind Jaguar when it comes to design facilities, says Mike Rutherford 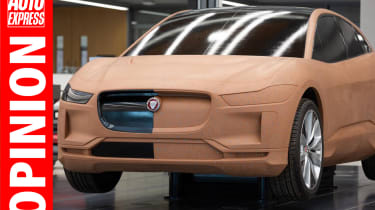 Jaguar has just invested untold years and countless people – plus a cool half a billion quid – on a new, world-beating product with a loud but stylish ‘Made in England’ tag proudly attached to it.

But the firm is insisting that this latest masterpiece, built at Gaydon, Warwickshire, isn’t for sale – at any price. Worse still for Jag customers past, present or future, there’s an effective ban on seeing, entering, using or photographing most or all of it.

Not that this cruel banning order for the masses applied to little ol’ me a few days ago, when I was granted high-security clearance and an ‘access-all-areas’ pass to what is surely a contender for the British motor industry’s 2019 product of the year.

Yes, my phone was confiscated, I had to promise not to touch anything, and was further hindered by being forced to sign a formal, non-negotiable confidentiality contract that prevents me from revealing much of what I saw and heard. But I am able to divulge that the Gaydon product in question is what Jaguar formally describes as “the most technologically advanced design studio in the world”.

The implication is clear, confident and provocative: automotive heavyweights – from the Americans to the Japanese, Koreans and Germans – are lagging behind Britain/Jaguar in terms of automotive design studio facilities. And, given the UK’s No.1 maker has won the coveted World Car Design of the Year award in two of the last three years (with the F-Pace and I-Pace), the icing on the cake is that the brand has lately beaten rival countries and companies in terms of raw design talent.

Julian Thomson takes over from the just-departed Ian Callum as Jag’s latest Design Director-cum guru, godfather, and much else besides. Callum is the toughest act to follow. But Thomo has what it takes, including a highly qualified and talented staff of almost 300 people; a ‘Modern Britishness’ creative philosophy; and a Jag Design Manifesto that makes no apologies for tapping into and borrowing ideas from great non-automotive British designs; whether Stella McCartney fashion, Marshall amps, or the Burberry trench coat.

Thomson assured me that he intends to “crank up” design-related affairs, and that “perhaps, in future, we’ll be even more Jaguar” – whatever that means. There’s certainly a new, positive, competitive and productive mood of “creative tension” under his reign.

His boss, Jaguar Land Rover CEO Sir Dr Professor (honest!) Ralf Speth told me that although he’ll reach formal retirement age soon, he’s in no mood to step down. German-born, Speth’s now a British citizen. Much has been said about his firm’s current trading difficulties, the rumoured (and strongly denied) acquisition by a foreign predator such as Peugeot, unwelcome Brexit mayhem, and his possible retirement come 2020.

But this is a man who facilitated £3.8billion worth of investment in England-based JLR this year alone. He’s ensured that the new Jaguar studio is the best on the planet. The I-Pace is the reigning (2019-2020) World Car of the Year. Brits really need to ask themselves what’s not to like and, more to the point, what’s not to be bloody proud of?

Do you agree that Jaguar has the best-designed cars on the road? Let us know your thoughts in the comments below...