Drivers will be able to buy fuel directly from their infotainment systems at Shell stations, with more e-commerce apps hinted at 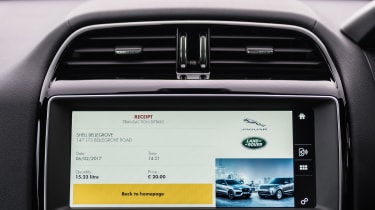 Jaguar has revealed a new app allowing drivers to pay for their fuel straight from the touchscreen infotainment systems in their cars – no need to queue in the forecourt shop or use a card at the pump.

The app forms part of the 2018 model year updates just revealed for the XE, XF and F-Pace SUV, though it will soon be available across the entire Jaguar and Land Rover ranges, on cars from 2014 onwards with the InControl Apps pack installed.

The app has been launched in tandem with Shell, so it’ll only work on the forecourts at their service stations. However, full UK coverage is promised, with a global rollout plotted soon. The app also uses geolocation data too, to pinpoint the nearest Shell station.

Apple Pay and Pay Pal support the system, with Android Auto compatibility planned for later in 2017.

Tapping through the display, drivers are asked to input a verification pin and a pump number. No paperwork is involved, as receipts are sent via email. It may sound frivolous for the sake of walking up to a kiosk, but Jaguar says the app could come in handy for drivers with young children as it means fuel can be bought without leaving the car.

The app is available to download now, and fuel isn’t the only e-commerce area Jaguar has its eye on. The company says in-car payment for parking, road tolls or even drive-through restaurants could be offered in the future.

Does Jaguar's app sound like something you'd get use out of? Let us know in the comments.