Jaguar steps back in time with E-Type Reborn initiative 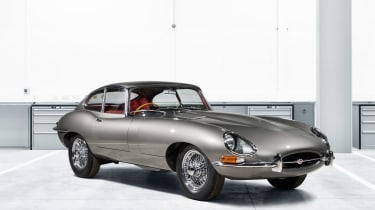 Jaguar is once again looking to its long and illustrious past, with a new restoration programme. Called the Jaguar Classic E-Type Reborn initiative, the programme does pretty much what it says on the tin; prospective buyers will be able to purchase a completely restored classic Jaguar E-Type.

The first of an initial batch of 10 restored E-Types will go on show at the 2017 Techno-Classica show in April; a year after Land Rover Classic showed off its factory-restored Series 1 Land Rovers at the 2016 show.

This is the first restoration project undertaken by Jaguar Classic. You may remember that the historical arm of Jaguar built several examples of the XKSS race car and E-Type Lightweights, but they were technically brand new, original models. These E-Type Reborn cars, however, are sourced by the Jaguar Classic team and restored to "concours-winning standard" in house.

The E-Type being displayed at Techno-Classica is a Series 1 4.2-litre Fixed Head Coupe in Opalescent Gunmetal Grey. Originally exported to California, the E-Type racked up around 78,000 miles before it was stored in the early Eighties. The bodyshell, engine and gearbox are completely original and have been rebuilt, while other “safety critical” parts have been replaced. Even the same spot-welding technique used when the car is originally produced has been used for ultimate authenticity. 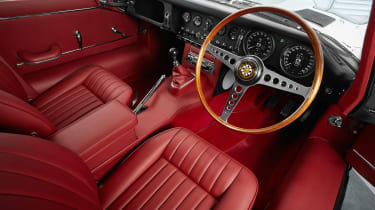 All of the E-Type Reborn models are Series 1 models produced between 1961 and 1968. Every restored model is pored over by the Classic team and rebuilt to the original 1960 specification so they remain as authentic as possible.

If you’re in the market for a completely restored E-Type, then you’ll have to stump up £285,000 at the very least. The price is “dependent on specification”, and you can specify parts from later E-Type models including improved cooling found on the E-Type Lightweight models or front brake calipers from Series 2 models.

How would you specify your classic E-Type? Leave us a comment below...