The S-Type is outdated but is great to drive, easy to get on with and makes a decent case for itself financially. 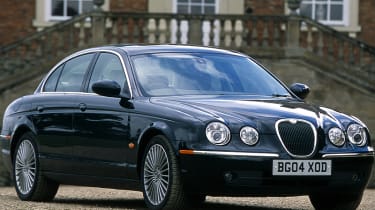 Driving: The Jag is a class act on the road. Ride is excellent - the only flaws are that bigger wheel options tend to thump slightly over shaper bumps and tyre road is noticeable on concrete surfaces. That aside, the S-Type could teach the Germans a thing or two about chassis engineering. Damping in particular is world class. Whether cruising on the motorway or tackling twisty B-roads, the S-Type excels. The handling is every bit as good, too. In fact, the informative steering is truly excellent, and the chassis is always composed and smooth. It's a joy around corners and is arguably as good as driver's car as the class benchmark, BMW's 5-Series. It's quiet too. The lack of noise from the V6 diesel at start-up is surprising, and even wheel the needle touches the 4,500rpm red line, there's barely a trace of noise - it's as smooth and silent as a petrol unit! Strong mid-range thrust makes overtaking easy, helped by the superb six-speed auto box, while the brakes are equally capable.

Marketplace: The Jaguar is an automotive aristocrat - and if you love the brand, chances are you'll appreciate the styling, too. It's typical Jaguar, and the four separate headlights and oval grille are a direct remake of the Mark II from the Sixties. And considering the S-Type has been around since 1999, we reckon it's ageing pretty well. Jaguar is known as a sporting brand, so it should come as no surprise to see even the 2.7-litre twin-turbo diesel is a potent unit. It competes with equally fine units in the BMW 5-Series, Audi A6 and Mercedes E-Class - plus left-field newcomers such as the Citroen C6 HDi and Land Rover Discovery TDV6, both of which use the same engine!

Owning: The S-Type's driver-orientated credentials are obvious the moment you slip behind the wheel. The seating position is spot-on and the chairs, with their deep, supportive backrests, are excellent. However, as with the bodywork, the dash is far from modern. Yet while that means the instruments and dials look old-fashioned, they are at least logical and simple to use. It doesn't have the rock-solid feel that characterises German interiors, but is robust enough, while details such as the electronic parking brake work well. With its bulky transmission tunnel, the S-Type suits two in the back rather than three, but there's plenty of legroom. There's a 60:40 split for the rear seats, but don't plan on carrying anything too bulky, because the 400-litre boot doesn't have much vertical height and is down on size compared to rivals. And while the dealers are very highly rated indeed, they know how to charge royally. Good job retained values are OK, as is fuel consumption, with a combined average of 36mpg. But, considering list prices alongside the competition, value is good and standard equipment levels pretty inclusive.