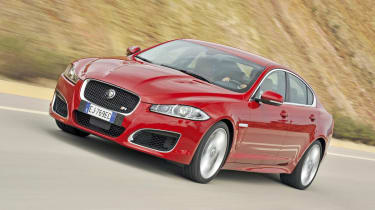 It's hard to believe that the XF was launched three years ago. While the original design wasn’t exactly dated, this refresh has done it no harm. In XFR trim it has addressed a major criticism – that the car didn’t look special enough. And although the updates don’t stretch to mechanical enhancements, customers will be still able to enjoy interior improvements that offer a genuine benefit.

Looking at the previous version of Jaguar’s BMW M5 rival, you’d hardly have suspected the mind-blowing performance that lay beneath its mild-mannered exterior. Yes, the XFR appeared different to less powerful models, but it wasn’t that much more aggressive. This is something the new version addresses.
[[{"type":"media","view_mode":"content_narrow","fid":"69328","attributes":{"alt":"","class":"media-image"}}]]
As with the rest of the revised XF line-up, the flagship’s radiator grille, bonnet and front wings have been subtly altered. The grille is more vertical and the headlamps – now with bi-function xenon technology – are thinner, with new LED running lights in what Jaguar calls a J-blade shape.
All models get a bigger bonnet bulge, and on the XFR,the three vents below the grille are finished in black rather than chrome. They are also bigger, and combine with a more prominent chin spoiler.

Behind the front wheels the vertical vents remain, but to fit in with the XK and XJ models they are topped with a horizontal chrome strip bearing the brand name. At the rear, in line with other Jaguars, there are new LED lights. The XFR also comes with a discreet little boot lip spoiler.
This combines with a new race car-style diffuser – positioned in between the pair of twin tailpipes – to improve stability at speed.
At the side the sill lips remain, and these now look more at home within the XF’s overall framework. The result on this model is a much more aggressive stance than on less performance-oriented cars.
Inside, drivers sit behind a new, smarter-looking steering wheel, and the switches on the centre console are black plastic rather than silver. This means the dash doesn’t look quite as cohesive as before, but they’re easier to see in sunlight.
The software in the centre dash screen has been updated, making reactions quicker. And instead of the rapidly dating black and white graphics in the driver’s readout between the dials, this is now colour, as inspired by the XJ. The new leather sports seats grip you well, too.
Under the bonnet, the XFR still features the growling supercharged 5.0-litre V8, and power and torque outputs look impressive enough on paper. On the road, they are electrifying.
Put your foot down, and with peak torque reached at 2,500rpm and then stretching all the way to 5,500rpm, the car’s mass appears to shrink around you.
This is exaggerated on fast, winding roads. The XFR doesn’t feel like a large saloon. Body control is excellent, it turns into corners precisely and it seems more agile than a vehicle this size has any right to. It’s an extremely accomplished car.
Those talents extend to the ride, which is so supremely comfortable that it’s easy to forget you’re in a saloon that will give many sports cars a run for their money. Enhancing things further is the refined nature of the well finished cabin. While there’s some exhaust gruffness as the revs rise, it’s muted compared to the identically powered XKR.
All the changes bring a price rise over the old car. The new XFR costs £950 more, at £65,350, and we think it’s money well spent.
Share this on TwitterShare this on FacebookEmail