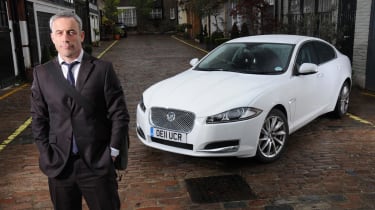 8
As Auto Express’s publisher, I lead a hectic executive lifestyle that sees me rushing between business meetings and brokering deals. And now I’ve got the perfect four-wheeled partner for my busy daily routine: our Jaguar XF.
Following brief stints in the hands of editor-in-chief Steve Fowler and senior road tester Owen Mildenhall, the keys to the big saloon have finally found their way into my eager hands.
With its sleek looks and opulent cabin, the Jag has all the right credentials to make an impact in the corporate car park – and it has also drawn a few appreciative nods from my neighbours at home.
The XF is equally impressive on the move, where the smooth 2.2-litre diesel engine, top-notch refinement and excellent comfort make it the perfect place to unwind after a hard day in the office. However, as the father of two young children, I’ve been most impressed by the Jaguar’s family-friendly credentials.
Although the XF’s cabin isn’t as roomy as rivals such as the BMW 5 Series and Audi A6, it’s more than big enough for a family of four. There’s plenty of legroom in the rear, while the interior is littered with a surprising amount of storage space. What’s more, the 540-litre boot swallows my daughters’ large buggy with masses of room to spare.
I also love the cabin’s upmarket ambience. Soft leather covers the seats, while beautiful wood veneer is used on the centre console, dashboard and door trims. And I love the start-up procedure, which sees the gearlever rise serenely out of the centre console and the air vents in the dash automatically roll open.
But my favourite gadget is the touchscreen sat-nav, which gives you loads of useful information: on motorways, it displays the distance to the next junction and the nearest services. Not that you’ll need the latter, as the Jag isn’t a frequent visitor to the pumps.
As someone who has a keen eye on the bottom line, I’ve been pleasantly surprised.

“I agree with James that the Jag’s sat-nav is full of useful features, but its touchscreen interface feels clunky compared to rivals’ rotary wheel set-ups.”Owen Mildenhall, Senior road tester

“I recently tested the new BMW 520d and Mercedes E250 CDI. Yet the Jaguar XF 2.2d beat them both for ride quality, interior finish, style and value.”wallyman, via www.autoexpress.co.uk