Our diesel Jaguar XF saloon continues to impress... and shows its practical side, too 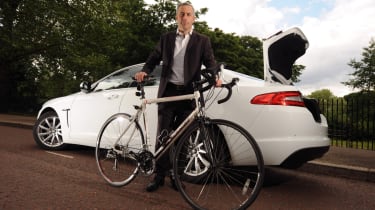 I’ll admit I was ready to put the boot into our Jaguar XF. You see, when I recently needed to get my bicycle home, the sleek executive saloon was the only car left in the Auto Express garage.

As I wheeled my lightweight racer up to the rear of the four-door Jag, I was convinced it wasn’t going to fit in, as the XF’s cabinis actually rather snug, despite the imposing exterior dimensions. Popping open the tailgate revealed a narrow opening, plusa load bay that’s hobbled by a few awkward intrusions. My mood didn’t improve.

Fortunately there’s a standard split-folding rear seat (you have to pay extra for one of these on a BMW 5 Series), which helpsto free up 923 litres of carrying capacity. So, with the rear seats folded, I was amazed to find my bicycle slid straight into the backof the Jaguar. Sure, I had to remove the bike’s quick-release front wheel, but there was more than enough space left over to carry it, too.It makes me wonder why anyone would need the forthcoming XF Sportbrake estate.

With the bike safely stowed, I was able to enjoy the journey home behind the wheel of one of the most comfortable and relaxing cars on our fleet. No matter how many times I climb aboard the Jag, it always manages to feel special. Additions such as the soft leather covering the seats, classy wood trim for the dashboard and the cool blue ambient lighting give the cabin a high-class feel.

Better still, the car’s 2.2-litre diesel engine continues to improve. As the miles pile on, the turbo motor feels stronger and more refined than ever, while the  eight-speed automatic gearbox shifts seamlessly. And despite my traffic-clogged commute across London, I’m seeing a respectable 35.1mpg.

The good news for potential buyers of new XFs is that a recent engine upgrade has upped power by 9bhp to 197bhp, while CO2 emissions have been cut from 149g/km down to 135g/km. However, this still falls short of the more eco-friendly figures of the Audi A6 and BMW 5 Series.

And this isn’t the Jag’s only shortcoming: A couple of late-night cross-country dashes have highlighted the car’s weak headlamps. There are no complaints about the brightness of the standard xenons, but the lamps’ short range – even on high beam – leaves you straining to see on unlit sections of road. I’ll be getting the lights checked out at the next service, as a minor adjustment may be all that’s needed to cure the problem.

There’s no doubting the effectiveness of the standard LED running lamps, which help the car stand out on the road during the day and attract plenty of admiring glances. Not that the rakish XF needs any extra help to turn heads, as the handsome four-door is still one of the best-looking saloons on the road.

In fact, I’m struggling to think of a car that I’d rather have in its place. A smaller model would be less stressful to navigate aroundthe crowded streets and multi-storey car parks of central London, but in every other respect, the Jaguar has won me over.

Stylish, comfortable, refined and great to drive, the XF is simply one of the most desirable executive expresses money can buy. And as my bike-carrying exercise proved, it’s also more than capable of getting its hands dirty as practical load carrier.