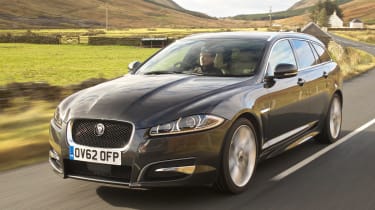 The 2.2-litre diesel will make up the majority of sales of the XF Sportbrake, but the 3.0-litre V6 is our favourite. That’s not only because it’s far quicker than the four-cylinder, but also because of the added refinement. It brings a level of luxury to the Sportbrake that 2.2-litre models are missing. Don’t allow the more aggressive styling and handling upgrades to fool you into thinking this is a focused performance car, though; comfort is still very much top of the agenda for the Diesel S.

Jaguar seems convinced it won’t be offering an XFR Sportbrake, so if you want tyre-smoking estate car thrills this flagship Jaguar XF Sportbrake S is as close as you’ll get.

Underneath the bonnet is a 3.0-litre V6 diesel engine producing 271bhp and – more importantly – a mightily impressive 600Nm of torque. The major benefit of that is a serene turn of pace that the noisy four-cylinder 2.2 just can’t match. While that engine builds speed with a harsh noise from under the bonnet, the V6 feels – and sounds – completely unflustered.

It all translates to a 0-62mph time of 6.6 seconds and in-gear acceleration that almost feels the match of the 5.0-litre supercharged engine in the XFR. And the S has a few little XFR-style cues, too, including a more pronounced rear spoiler and more aggressive front bumper.

The suspension remains mostly the same as any other XF in the line-up, but Diesel S buyers get adaptive dampers and a Dynamic mode that sharpens up the throttle response, allows a little more slip from the rear wheels and leaves the driver to make all the upshifts using the steering wheel-mounted paddles.

Some buyers might be disappointed that the changes to this range-topper aren’t more extensive, but the set-up of the standard Sportbrake is so well judged that the decision to keep it simple is justified. It rides well over the roughest of roads and can be agile when you need it to be. Jaguar even went as far as to load the Sportbrake up with a fridge in the boot before sending us to tackle an emergency lane-change manoeuvre. The difference between a laden and unladen Sportbrake was negligible, and that’s partly down to the self-levelling rear suspension fitted to all Sportbrakes.

That’s not to say it feels like a sports car, though, with the kind of light but accurate steering that helps make Jaguars so relaxing and capable, but not genuinely thrilling.

And the S is just as practical as every other Sportbrake, featuring a 550-litre boot that can be extended to 1,675 litres by folding the rear seats down. There’s a completely flat load area, too, and adjustable load rails in the floor to help secure your luggage.

Diesel S models start from £44,355 putting it on a par with the 530d Touring M Sport and Audi A6 Avant S 3.0 TDI S line. You won’t be ticking too many options boxes either, thanks to the leather seats, sat-nav, parking sensors and powered tailgate that all come as standard.

When it comes to quick, diesel-powered premium estates, buyers can pick between plenty of fantastic cars. That makes it difficult for any manufacturer to break into the exclusive Audi, BMW and Mercedes circle. But the fact that the Sportbrake Diesel S has done just that – and with ease – reveals just how good it really is.