The BMW 5 Series Touring is due for replacement, but still offers plenty of style, space and luxury 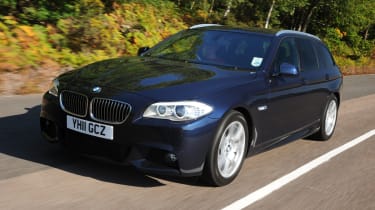 The BMW 5 Series Touring competes against a small but notable bunch of premium executive estate car rivals, and appeals to drivers who need a business workhorse, as well as those with busy family lifestyles who don’t want to choose an SUV.

Picking a winner from a 5 Series Touring vs Audi A6 Avant vs Mercedes E-Class estate comparison is not an onerous task, as they’re all extremely enjoyable to drive and impressively practical. Granted BMW’s 5 Series Touring boot capacity isn’t quite as large as the Merc’s, but it matches the Audi Avant for load space and usability. It also has a fantastic rear-drive chassis, a range of super-efficient diesel engines, and – as long as you invest in the adaptive damping option – an impressively supple ride.

The 5 Series Touring for sale today has been around some time, and there’s a new model in the offing which shares much of its platform with the latest BMW 7 Series and is much more technically advanced than the current car. While we wait for the newcomer – expected to arrive in UK showrooms in 2017 – the current model continues in three trim levels and with a wide range of engine choices. 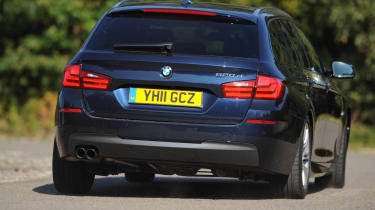 The line-up kicks off with the popular SE model which is already well-equipped with features such as 17 inch alloy wheels, navigation, Bluetooth, DAB radio, leather upholstery, twin-zone aircon, roof rails and automated tailgate.

There’s a range of engine options to suit most tastes, whether that’s for sporty petrol performance or diesel efficiency. You can’t have the xDrive 4x4 system here in the UK though, and there’s no M5 Touring available either.

Painless to own and great to drive, the BMW 5 Series Touring is a class act. It doesn't have the ultimate boot space of a Mercedes E-Class Estate, but it's as practical as an Audi A6 Avant, plus has a brilliant driving experience thanks to its balanced rear-drive chassis, superbly economical diesels and a supple ride – provided that you stump up the extra for some clever adaptive dampers.

There's an engine to suit every need in the 5 Series Touring, with potent petrol and frugal diesel engines available. BMW has also just made the 5 Series available with a new TwinPower Turbo diesel engine, with class leading fuel economy and emissions. At the opposite end of the scale however, a twin-turbo V8 in the M5 is also still on offer.

With bank vault build quality, this is one estate that will go on and on. There are three trim levels - SE, Luxury and M Sport - all are well equipped with kit like leather seats, parking sensors, sat nav and alloy wheels all included as standard.

The most popular version of the 5 Series is the 520d, offering great performance, strong economy and excellent refinement.  The 520d also gets a new 2.0-litre TwinPower turbo diesel engine, developing 188bhp and 400Nm of toruqe – thats 7bhp and 20Nm more than the previous unit.

All of the 3.0-litre petrols are quick and smooth, although obviously not as cheap to run. The only real reason the 5 Series doesn't get a maximum rating here is because you need to pay extra for adaptive dampers - in standard trim, the ride isn't as good as it should be, plus the dampers make the handling much better. Factor in brilliant refinement and a super-smooth eight-speed auto box, and you've got a great all-rounder.

Thanks to stop-start and brake energy recovery, the Touring is remarkably economical – the 520d SE claims 62.8mpg and CO2 emissions of just 118g/km, making it the most efficient in its class and a winner for business buyers.

Even the 535d claims over 50mpg – and it can do 0-62mph in a blistering 5.5 seconds. It's a different story for the petrol cars, which are fast but rather thirsty. The only downside is the list price – this isn't a cheap car to buy and it's easy to spend £40,000 once you've added a few options on top. However, residual values are very strong, reflecting the car's huge desirability on the secondhand market.

Unlike the old BMW 5 Series, the latest model is unlikely to cause offence – it's smart, sleek and blends neatly into the background. That could be a problem for some buyers, which is why BMW offers the M Sport package, which adds more aggressive bumper and bigger alloy wheels.

Inside, the cabin is just as good as anything from Audi or Mercedes with a logical layout that is easy to use and focused on the driver – the iDrive system has been tweaked recently and is now clearer and includes online services - and the brilliant seats offer all the support you would expect of a high-speed executive express.

The boot is not as big as a Mercedes E-Class Estate, but it's still enormous. The 5 Series Touring has 560 litres seats up and 1,670 litres seats down, while the E-Class boasts 695 and 1,950 litres respectively. Compared to the Audi A6 Avant, the BMW is about as spacious.

It has the widest load floor in the sector, though, a standard netted load divider, a shallow underfloor stowage area and a split-opening rear hatch. Plus there are lots of lashing points and even self-levelling suspension to cope with heavy loads. In the back there is lots of room for two adults, but the transmission tunnel forces the middle seat passenger to sit with their knees raised.

Also the 5 Series has become a seriously big car so narrow car parks and country roads can present problems as you try to weave it in and out of small spaces.

The BMW 5 Series Touring is a very safe car. As standard, there are six airbags, plus traction and stability control that has several stages you can choose between. Options include a head-up display, which helps keep the driver's eyes on the road ahead. Factor in a maximum five-star Euro NCAP crash test rating and a pop-up pedestrian impact bonnet, and you've got a very safe car.

The only negative is that the 5 Series is not available in four-wheel drive form in the UK as it is in Europe, so you might need a set of winter tyres when it gets cold and icy. As for reliability, we would expect the 5 Series to be pretty faultless given the strong performance of the previous car in our Driver Power survey.