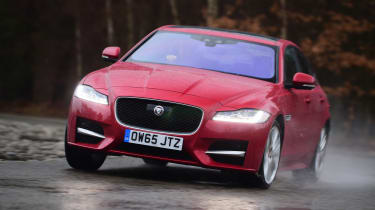 The Jaguar XF offers buyers looking for an economical all-wheel-drive executive car a true alternative to the Audi A6 quattro. While you sacrifice some efficiency and performance by going for the AWD version over a standard model, the extra traction will be invaluable to some. It’s good to drive, comfortable and spacious inside, but most UK buyers would be better spending the £1,800 premium on some options to enhance luxury.

The Jaguar XF is one of our favourite executive saloons thanks to its impressive blend of style, performance and economy. Now Jag has added an all-wheel-drive model to the range, and we’ve driven it on greasy UK roads.

The 4x4 system is derived from the version fitted to the F-Type sports car, and while it’s only available with the 178bhp 2.0-litre diesel engine, it’s set up to be good to drive as well as grippy in the wet. 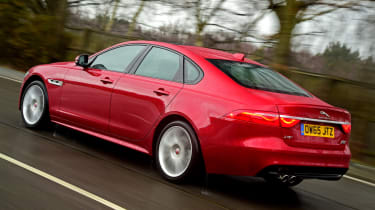 Jaguar’s ‘torque-on-demand’ system sends power where it’s needed the most. It checks to see where the grip is and automatically applies torque to the front or rear axle as necessary. In normal driving, the XF still feels like a rear-wheel-drive car, but when things get slippery, there’s no doubt this is an all-wheel-drive model.

In wet conditions, the XF AWD feels more planted – especially in corners, where you can sense the torque shifting to add grip. The superior traction is noticeable from a standing start, too, reducing wheelspin when you pull out of a junction quickly.

Still, it’s much less noticeable in the dry, where the XF remains great to drive thanks to quick, well weighted steering and firm suspension that limits body roll. There’s a driving mode selector that firms up the ride in Sport mode, but it makes little difference – the ride in normal mode is both comfortable and sporty, anyway. 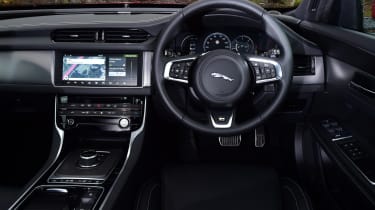 So where do you start to notice the extra weight in the car’s performance? An additional 105kg on the XF’s bulk means 0-60mph takes 7.9 seconds – two-tenths slower than the standard car. It’s not much, but the Jaguar is already down on power compared with its closest rival, the Audi A6.

The 178bhp diesel falls short of the 187bhp 2.0-litre TDI in the A6 quattro, but economy figures are almost identical: the Jag claims 57.7mpg, compared with the Audi’s 57.6mpg. The Jag’s rival is slightly cleaner, too, emitting 128g/km of CO2 to the Jag’s 129g/km. Yet while that puts the cars in the same tax band, the Audi’s lower list price means its Benefit in Kind should be cheaper. The XF’s trump card is torque, and with 430Nm available from 1,750rpm, there’s plenty of shove at low revs. 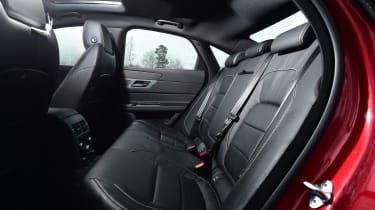 The difference in performance between these two executive saloons is very small, though, and the eight-speed automatic gearbox shifts smoothly and quickly. The cabin is well insulated as well, which keeps engine and road noise at bay, even at higher speeds.