Jaguar has revealed its rival for the Mercedes E-Class Estate and BMW 5 Series Touring; the new XF Sportbrake. It joins the saloon and quashes rumours of plans to cull the estate bodystyle after the old model was canned.

The big feature is the additional boot space, granted by the larger estate rear end. With the rear seats in place the new XF Sportbrake boasts a 565-litre capacity, which is 25 litres up on the saloon. Folding the 40:20:40 seats exposes the difference, though – with the 1,700-litre volume shaming the four-door’s 885 litres. A load cover and four tie-down points also feature.

With these figures, the XF Sportbrake is just about on par with the 5 Series Touring when it comes to practicality. The only difference between the two is the Touring’s additional five litres of space with the rear seats upright. But the new Jaguar doesn’t trouble the E-Class Estate, which offers a total capacity of 1,820 litres. 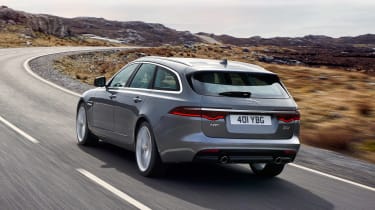 The Sportbrake takes its design language from the XF saloon but morphs into a rakish estate with a dipping windowline. An optional panoramic roof is offered with a gesture-controlled blind, while the tailgate comes with a foot-operated function.

Unsurprisingly, the cabin is mostly carried over from the saloon, with the same fixtures and an identical dashboard. Jaguar points to improved rear passenger space compared with the previous generation, however, with more leg and headroom. There’s a new air filtration system, while headline options include digital dials and a 10-inch infotainment system.

The part-aluminium construction results in near-50:50 weight distribution, and there’s a new suspension configuration. At the front the set-up is light and stiff for better turn-in, with slightly tweaked dampers, too. Meanwhile, air suspension is fitted as standard at the back – as on the BMW. 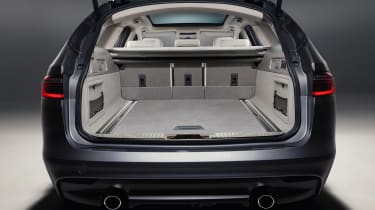 Trim levels follow the four-strong line-up of the saloon – comprising Prestige, R-Sport, Portfolio and S – but engines are more restricted. Four diesels are offered: a choice of 2.0-litre units with 161bhp, 178bhp or 237bhp, plus a 296bhp 3.0-litre V6. The 161bhp engine comes with a manual gearbox; the 178bhp and 237bhp options feature an eight-speed auto.

Four-wheel drive can be specced on the mid-range car; the top-spec model gets it as standard. The sole petrol is a 247bhp 2.0-litre. Prices will start from £34,910.

Would you choose the Jaguar XF Sportbrake over the BMW 5 Series Touring? Let us know below…