The wildest Jeep concept cars driven: on the road in 5 all-American oddities

Jeep is one of the most prolific brands for producing concept cars. We drive five of the latest and wildest 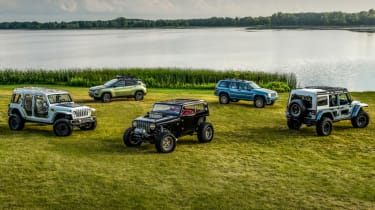 For most marques concept cars are something of a rarity. They might pop up every few years, grabbing the headlines at motor shows. Then they’re gone, occasionally leaving behind a production car with perhaps a passing resemblance to the concept that previewed it.

Nobody, though, is as prolific as Jeep when it comes to producing concept cars. At this year’s annual Jeep Safari in Moab, Utah, it took the wraps off not one, not two, but seven different concept cars.

But why? Jeep boss Mike Manley invited us to Detroit to find out and to drive some of them – a rare opportunity given their handmade and priceless nature.The Jeep Safari is an annual event run by owners and Jeep fans, with the company attending as an invited guest. And what a guest it turns out to be, given the excitement each year surrounding the concept cars it inevitably brings. 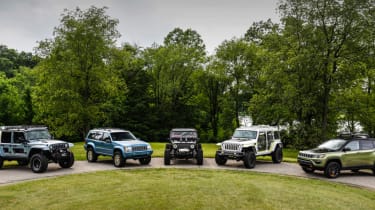 “There are three elements that are important to me,” Manley told us. “One is the engagement for all of the teams here. The guys get to be given a relatively free rein to design or resurrect things from the past or visions of the future.

“Then there are our customers and fans. They really use the Jeep Safari to enjoy their cars, but they know we’re there, too. Our designers are there, our engineers are there, and they get to interact with the owners and Jeep fans.

“And we really do use it as a test bed; there are a number of concepts that we have taken [to Moab] with ideas that have ended up on our future vehicles. Whether it’s interior treatments or door treatments – we test all of that and get feedback from our customers. “But the most important thing for us is the social interaction. We’ve become part of the community.”

Manley hinted that one of the concepts based on the current Wrangler was being used to preview something we might see on the new version, which is set to be unveiled at the Los Angeles Auto Show next month.

Jeep’s chief designer Mark Allen gave a little more away when we praised the ‘doughnut’ doors on the Jeep Switchback concept. “I’m really, really glad you like those doors,” he revealed. But before we could get our hands on the cars for an exclusive drive, Allen’s boss and chief designer for the whole Fiat Chrysler group, Ralph Gilles, spoke to us about how he views concepts.

“We don’t do the predictive ones any more, the ones that mildly resemble something that we’re going to do,” he said. “We produce concepts that explore styling or connectivity or something that might change the messaging for a brand. So they’re endlessly valuable. “The cars you’re going to drive are very different – not the typical auto show concepts,” he added. 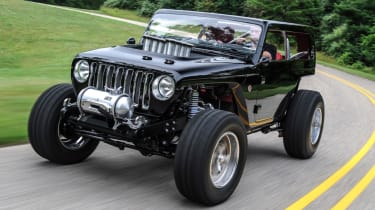 “In a way they’re a training device for the younger designers – we often get new students or people transferred from other studios, so we’ll have designers seeing how far we can take the Wrangler and see how far we can push it or add modern details to a 20-year-old car. Any way they want to celebrate ‘Jeepisms’ we allow them to and we share the very best ideas.

“My favourite part is when you take someone who’s never been to Moab, but they take their design from a sketch over six or seven months, then they’re able to drive their creation in context in Moab,” Gilles explained.

“They come back from that experience changed for life with an appreciation of what Jeep stands for, what it means and what it can do. That’s then buzzing inside them when they’re sketching future products.”

The Safari also plays a big role for Fiat Chrysler’s Mopar brand. Mopar runs the group’s service and customer care departments, but is probably best known for the parts and accessories it supplies to owners. Many of these parts make it on to the concepts shown in Moab. The Jeep Trailpass, based on the new Cherokee, is a prime example of how a new model can be customised with Mopar’s help, as Pietro Gorlier, the head of parts and service for Mopar, explained to us.

“It’s important that we show to every customer that they have the opportunity to upgrade a Jeep to make it even more powerful and capable,” he said. “The Safari and SEMA [modified car show in Las Vegas] are the two possibilities we have to test new products with customers. Sometimes they may become an accessory or an option for a production car. “We can take some cars to the extreme; we give the idea of what customers can do with their cars, although some of the prototypes we could never build for customers.” 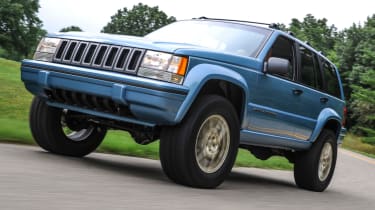 One such concept is the Jeep Quicksand, the first model we grab the keys to. Its outrageous hot rod styling with a cut-out bonnet, through which eight open headers sit, is pure concept and it’s based on a stretched two-door Wrangler.

It’s supposed to appeal to fans of ‘sand culture’, but we’ve got it in a private area of one of Michigan’s smartest parks. Still, we’re not too embarrassed to start it up and blip the throttle to hear one of the loudest barks you could possibly imagine, amplified by the two rows of trumpets you peer past through the windscreen.

As with so many other concept models, this one-off is a little temperamental, but the Jeep guys encourage me to floor it as we drive up and down through the park, enjoying the bespoke interior, six-speed manual box with exaggerated shifter and that noise from the engine.

Next up were two Wrangler-based cars the Mopar team had plenty to do with – the Safari (named after the Moab event), with its translucent roof and doors plus a hi-tech interior, and the rugged Switchback, with a whole host of kit added to up its off-roading capability. The park did little to test either car’s talents, but the go-anywhere nature of the Switchback in particular revealed the extent to which some owners will want to go to modify their own cars.

The Trailpass was the new Cherokee’s first appearance at Moab, but it, too, proved what could be done to take the car further off road with raised suspension plus bigger wheels and tyres. There were even special versions of Mopar’s top-selling item – floor mats! 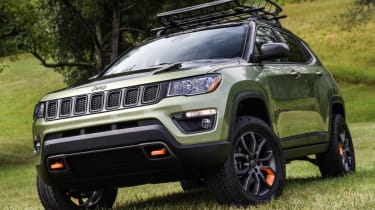 Finally there was a car that the Jeep team has obviously enjoyed putting together – the Jeep Grand One, which was created to celebrate 25 years of the Grand Cherokee.

Design chief Mark Allen chuckled as he showed us the nineties’ car phone his team had added, as well as the wood effect in the paintwork and plaid roof lining. He even revealed the car’s big secret – one of the rear lights slides out to reveal a hidden compartment.

It might not be a new model, but driving the Grand One brought back memories of bringing my daughter home from hospital as a newborn in a Grand Cherokee.

And that’s exactly what these cars are supposed to do – evoke memories. The ride was still fairly plush in spite of the massive modifications underneath, but this car’s retro charm was one I really fell for.

So all we need now is to find a nineties Grand Cherokee, a copy of the Mopar catalogue, some cash and some spare time. But if anything will persuade us to do all that, these Jeep concepts certainly do – exactly what these outrageously fun models are designed for.

Which is your favourite Jeep Concept? Let us know in the comments below.