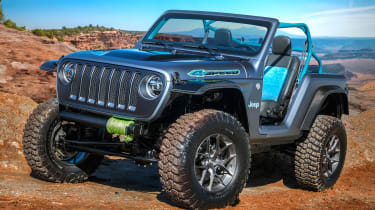 Jeep has revealed seven new concept cars for the 2018 edition of the annual Moab Easter Jeep Safari, once again joining forces with tuner Mopar to create the one-off off-roaders for Jeep fans in attendance.

This year is the 52nd edition of the Moab festival, with thousands of stateside Jeep enthusiasts set to head for the Utah off-roading hot spot when the safari begins on 24 March.

The first of the seven concepts is called the Jeep 4SPEED, and is a lightweight, paired back, short wheelbase off-roader carrying the torch of 2011’s Wrangler ‘Pork Chop’ and the Stitch concept brought along to the Moab meet in 2013. Based on the latest Wrangler, it gets a turbocharged 2.0-litre four-cylinder engine, with custom weight saving measures including a carbon fibre bonnet, and a custom, swept back roll cage. 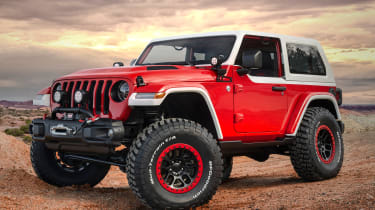 It’s one of five Wrangler based concepts created by Jeep and Mopar for the show. Alongside it is the Sandstorm - said to be inspired by Baja desert racers, with a 6.4-litre V8 under the bonnet and a trick, heavy duty suspension setup.

The other three Wrangler concepts for Moab are more conventional. The Nacho concept is described as a rolling catalogue for Mopar’s performance parts offerings, while the J-Wagon and Jeepster concepts do the same for Jeep’s own in-house styling and performance extras. The Jeepster itself is a nod to the 1966 Jeep of the same name, boasting the same white and red two-tone paint finish.

Meanwhile, the B-ute concept has been created to showcase parts available for the smaller Renegade crossover. The final concept is a true nod to the brand’s heritage – the Wagoneer Roadtrip is based on the original 1965 Wagoneer, though sporting a wheelbase five inches longer.

A wider track and flared wheel arches are new too, alongside subtly reworked bumpers. The suspension and drive system has been upgraded to deliver Moab-worthy off-road credentials, while a 5.7-litre V8 is under the bonnet, mated to a four-speed automatic gearbox.