Is the revised four-wheel-drive Jeep Compass heading in the right direction? 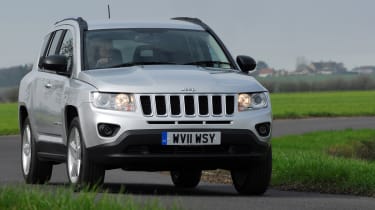 Jeep has taken its compact SUV in the right direction with a more distinctive, defined look and upgraded interior. It’s just a pity the latter still doesn’t feel luxurious. And while the 2.2-litre diesel is powerful, it’s much too noisy and not as efficient as many alternatives. Although this Compass is well equipped, Jeep’s image and four-wheel-drive system aren’t enough to point it to the top of the class.

The refreshed Jeep Compass is pointing right at the heart of the crossover market. While entry-level versions battle it out with the top-selling Nissan Qashqai, Ford Kuga and VW Tiguan, this four-wheel-drive model is more in keeping with the Jeep brand.
The facelift has been a success, providing the Compass with more defined lines and muscle, while the characteristic seven-bar grille is marked out in chrome to give an upmarket appearance.
Inside, the chunky theme continues, with occupants greeted by an upright slab of plastic. It all feels well screwed together, but there are too many hard plastic surfaces. Thankfully, the steering wheel comes with a leather rim and the controls are acceptably tactile.

British buyers wanting the 2.2-litre diesel engine and four-wheel drive get only one trim option. It features leather, cruise control, steering wheel audio switches and climate control.
There’s loads of headroom, but not as much space in the rear seats as we’d like. The boot is a bit small and shallow, too. Still, there’s a pleasing touch in the shape of a set of speakers integrated into the inside of the boot door – these hinge down when the hatchback is open to provide some al fresco music.
The 2.2-litre engine delivers 161bhp and a hefty 320Nm of torque from low down in the rev range. It makes light work of the Jeep’s bulk, as the 9.8-second 0-62mph time shows. On the road, the car feels quick and you rarely need to change down to access this performance.
Refinement isn’t a strong point of this engine, though. It’s loud at idle and really uncouth if you push it hard. On the motorway, it settles down to a distant hum, but by then you’ve been distracted by the tyre roar.
What really lets the diesel down compared to those in the 4WD Qashqai, Kuga and Tiguan, though, is its fuel economy and emissions. The all-wheel-drive Compass isn’t much more thirsty than the front-wheel-drive car, returning 42.8mpg, but its main rivals do better.
Admittedly, the Compass is more powerful than most. But crossover and SUV buyers aren’t likely to be swayed by this, as they’re spoiled for choice right now. Even if you need four-wheel drive, there are more credible alternatives to the Jeep.
Share this on TwitterShare this on FacebookEmail