The new Jeep Gladiator pick-up is US only for now, but it could make it to the UK 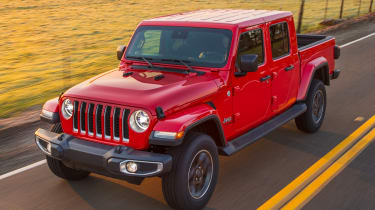 Should Jeep bring the Gladiator to the UK? From our perspective, it’s a resounding yes. It’s large, but only slightly bigger than a Mercedes X-Class – offering a combination of go anywhere carrying ability, upmarket quality and sheer cool that nothing else in the class does. Pricing would be key, but we reckon it would be an interesting alternative in the burgeoning lifestyle pick-up market.

With Jeep sales doing well in the UK, the iconic US brand could be forgiven for making hay while the sun shines. So surely it’s latest model – a Wrangler-based pick-up – would be a slam-dunk success on our shores?

For now, Jeep hasn’t committed to bringing the Gladiator to the UK. But, with right-hand drive models confirmed for other markets – and a 257bhp 3.0-litre V6 diesel arriving in 2020 – the omens are good. So, should Jeep UK lobby hard for the Gladiator? We headed to the US to find out.

The Gladiator has just gone on sale in the States and judging by our experience, it’s already got a cult following. Americans aren’t shy about letting you know their thoughts – and in our time with the car driving through New York and up into New England, there were plenty of thumbs-up, positive comments and people wanting to take a look. A new Jeep is big business, and the Gladiator is the biggest of the lot. 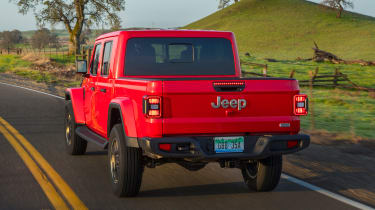 For some that might be a sticking point, but the Gladiator is no taller or wider than a Wrangler – and at 5,539mm long, it’s only 200mm longer than the Mercedes X-Class. Long, sure, but not unmanageable. That length means there’s a 1,531mm load bay, as well as plenty of room inside for five people to travel long distances in comfort. As we did.

Comparisons with the Wrangler are a little unfair, given the engineering that’s gone into the Gladiator. From the B-pillar forward there are carry-over panels, but the front frame is new, and there’s unique rear suspension, larger brakes and upgraded cooling to cope with the extra payload and towing, too.

The interior uses the same pieces as the Wrangler, and it’s a cool look. Jeep’s head of design Mark Allen, told us: “People asked us to put more heritage into the interior. So we listened. 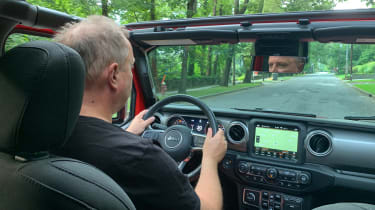 “There’s a more horizontal theme [to the dash],” he said. “We’ve lost the old centre stack and put in either a seven or 8.4-inch touchscreen, oversized controls and even four positions for people to put their mobiles. And the silver bits are all real metal.”

Knowing that buyers spend plenty of cash modifying their cars, Jeep is trying to tempt buyers with a host of clever options, including the ability to remove the roof and doors, and fold the windscreen flat forward. There are plenty of accessories for the load bay, too, including a two-stage tonneau cover. Inside there are lockable, waterproof, under-seat storage bins, as well as four auxiliary switches so owners won’t have to attach their own buttons to the dash.

One of the neatest options, though, is hidden behind one of the rear seats. Fold it forward and you’ve got a detachable, wireless Bluetooth speaker for the inevitable tailgate parties. It charges itself when in the car, and doesn’t sound bad, either.

Its maker proclaims that the Gladiator is 100 per cent truck and 100 per cent Jeep, so it proudly wears a ‘Trail Rated’ badge. Jeep says it’s unbeatable off-road and has the stats to prove it. It gets approach and departure angles of 40 and 25 degrees, with a breakover angle of 18.4 degrees – and things improve on the toughest Rubicon version.

“Off-road is who we are,” Allen told us. “Off-road is our Nurburgring.” We’ve no reason to doubt that, and the dirt trails we found on our test were totally dismissed by the Jeep.

However, the biggest surprise of all is how the Gladiator fairs in every day use. With the difficult-to-marry jobs of being an everyday car, capable load carrier and serious off-roader, Jeep’s engineering team have done an incredible job of making the Gladiator really comfortable and easy to drive. Unladen, it doesn’t have the uncomfortable bounce of many pick-ups, with a ride that’s compliant over all but the very worst surfaces. 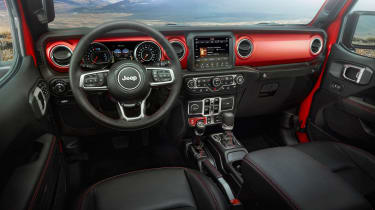 It’s quiet, too. The 3.6-litre V6 isn’t there for its sprinting abilities, but it’s whisper-quiet most of the time and works well with the slick-shifting eight-speed auto. And of course, there’s a low-range option for serious off-road work.

The only downside is steering that’s purposely a little slack – as a good off-roader’s helm should be – meaning it takes a little getting used to, with constant corrections on the motorway. Oh, and the turning circle is wide, which you’ll need to remember.

The bluff shape means wind noise is a little apparent at cruising speeds, but that’s partly down to how quiet everything else is. The Gladiator may not be the last word in luxury, but it’s surprisingly upmarket – and you’ll be amazed how easy it is to live with.