Jeep's funky Renegade gets a limited edition 'Night Eagle' spec, but can it swoop the SUV to success? 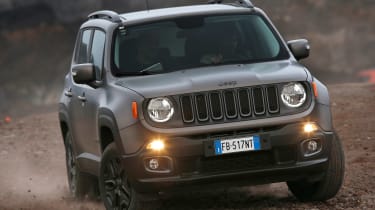 Night Eagle trim makes the Renegade a bit more special on the outside, but it doesn't look or feel much different in the cabin. Given the standard SUV is pretty distinctive on its own, we'd stick with well-equipped Longitude spec and save £1,300. The Jeep is still better off-road than on it, but its a stylish and good value alternative to more conventional rivals from Japan and Germany.

Jeep's new European sales push began with the Renegade early last year, and it's rugged design yet compact dimensions are already proving popular. To up the style appeal a notch the American brand has now launched a new 'Night Eagle' special edition. We tried it on and off-road in Sicily to see if it's worth splashing out on.

The Renegade is based on the trendier (and cheaper) Fiat 500X, but Jeep justifies the extra cost of its SUV with its tough, all-American styling and off-road ability. The Night Eagle, limited to just 350 examples in the UK, adds kit such as 17-inch black alloys, three unique paint options, satin grey detailing, rear parking sensors and coloured roof rails. 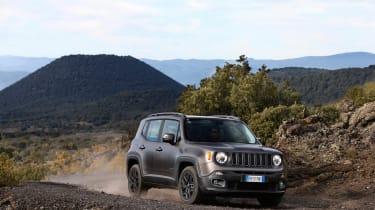 The problem is that the Night Eagle adds another £1,300 to the price of the existing Longitude spec, which puts it well into similarly-equipped Nissan Qashqai and Skoda Yeti territory. It's up against some established competition, then, but at least it looks the part, with our Volcano Sand matt grey test car really standing out on the road - and off it.

The Night Eagle's extra spec is more noticeable on the outside, however, so step in the cabin and, other than the questionable brown seats, it's business as usual. That means you get space that almost matches that of the Nissan Qashqai (a car that's technically from the class above), good kit levels and lots of heritage-filled 'easter egg' detailing to remind you you're in a Jeep.

What you don't get a whole lot of is quality, however. Most of the touch points feel sturdy enough, but it doesn't take much poking around to find cheap-feeling plastics and controls straight out of the Fiat parts bin. Visibility is poor, too, thanks to thick pillars all-round. 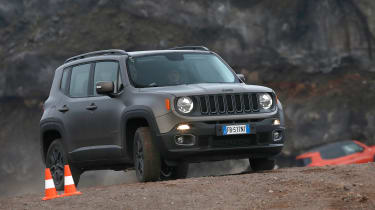 On our dedicated off-road route around Mount Etna and through some river fording sites, the Renegade really held its own, keeping up with larger Jeep Cherokees over even the roughest terrain.

When we turned onto the highway, however, things weren't as impressive. The ride is soft and initially comfortable, but bounces over rougher roads, and wind noise is noticeable. Combine that with the numb steering and punchy but noisy 2.0-litre diesel engine, and there's little of the driver appeal you'll find in the Mazda CX-5. Despite this, the Renegade still has plenty of appeal to those looking for a smart urban crossover that can also hold its own in the rough.