The Jeep Renegade is now available with a new 1.0-litre petrol engine, but does it suit the rugged small SUV? 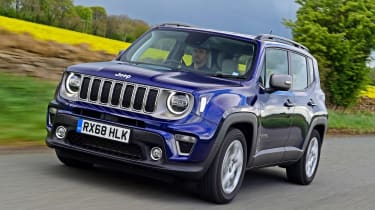 The Jeep Renegade’s new three-cylinder petrol engine is a welcome addition in a diesel-dominated range. Rivals are better built and sharper to drive, but few offer the Jeep’s rugged charm and true SUV styling. We’d stick with the cheaper Longitude model for maximum value for money.

New car buyers love an SUV – normally for their space, style and presence, rather than their water-wading abilities or off-road prowess.

But Jeep does things differently. Like Land Rover, the American maker prides itself on its go anywhere nameplate, with even the smallest and cheapest models available with raised suspension and four-wheel drive.

Yet even the hardiest manufacturers can’t ignore the pressures of their ever-fussy customers – as well as the crushing need to comply with increasingly stringent emissions regulations. As such, Jeep has recently facelifted its Renegade SUV, launching with a pair of new petrol engines designed to offer much of the firm’s usual appeal, in a more environmentally conscientious package. 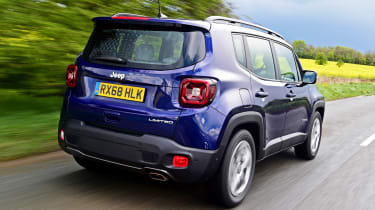 As well as the existing three diesels, there are two new petrol engines to choose from – the first of which is the three-cylinder 118bhp 1.0-litre turbo tested here. For an extra £2,100, you can step up to the more powerful 1.3-litre four-cylinder with 148bhp. Both are front-wheel drive; the lower-power car gets a six-speed manual box, while the punchier model is only available with a six-speed auto.

The Renegade’s basic aesthetic is almost completely unaltered, save a set of new headlamps with built-in LED DRLs, some new bumpers and a set of X-patterned tail-lights. Jeep says there are some new wheel designs, too.

You’ll have to look even closer to spot the changes inside, where the chunky dash design is carried over wholesale. There are some new cupholders and storage compartments, but that’s your lot. 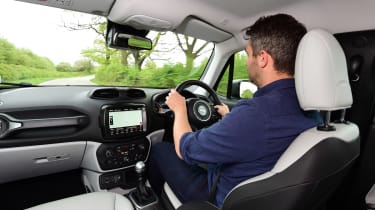 Thankfully, Jeep has made Apple CarPlay and Android Auto available, which makes it easy to bypass FCA’s clunky infotainment system. The screens still aren’t the sharpest, but the third-party software makes the set-up far more palatable to use than ever before.

The engine is the big news, however, so let’s focus on that. The peppy 1.0-litre is a huge improvement on the rattly diesels, and is far better suited to the kind of stop-start town driving so many Renegade buyers will be familiar with. It’s not without fault, however, as it can be quite laggy – meaning you need to work the gearbox to get the most from it.

This can be frustrating on the motorway, where you often find yourself shifting down a gear or two to pass slower moving traffic. It can force you to hold onto first or second when pulling out of junctions, too, making hill starts trickier than you might hope.

Jeep says this three-cylinder model will do almost 40mpg on the new WLTP test cycle, compared with nearly 50mpg for the most efficient 1.6 diesel. The faster 2.0-litre MultiJet diesel 4x4s are thirstier even than this basic petrol, however.

On our test route, the MultiAir engine proved impressively refined, staying hushed right the way up to 70mph. And while there is a little wind and road noise – it’s nowhere near as bad as it could be given the Renegade’s bluff shape. 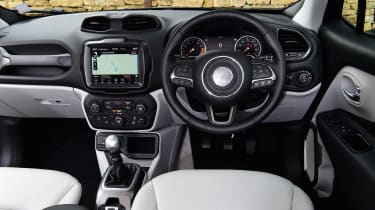 The tiny Jeep is no sports car, though. The steering is decently weighted, but there isn’t much feel. And while body roll is well contained for a car of the Renegade’s stature, a SEAT Ateca is far sharper and more enjoyable to drive. The ride is a mixed bag, too, feeling quite lumpy at times.

This is easier to accept on the 4x4 versions, which will go further off the beaten track than almost any rival. But on front-wheel-drive, more road-biased Renegades, it’s a harder pill to swallow. A Peugeot 3008 offers a finer balance of ride and handling.

Elsewhere, quality is fine but falls shy of the class best. Both the SEAT and the Peugeot feel better built, although neither has the rugged charm of the Renegade. The Jeep never feels cheap, but it’d be a push to call it luxurious.

Which is a tough sell given our test model costs almost £25,000 before options. Yes, cheaper versions are available, but you’ll need at least a Longitude (from £22,205) to get the larger central screen with CarPlay and Android Auto. All cars come with cruise control, air-con and all-round electric windows, however, while high-end Limited cars like ours boast full LED lights and leather seats.