Subaru and Jeep have muscled into the trendy compact crossover class, but is the Subaru XV or Jeep Renegade a more convincing choice? 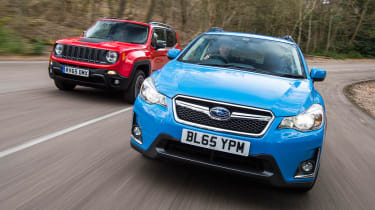 The Subaru XV has always been a leftfield choice in the compact crossover class. With its angular looks, novel flat-four engine range and utilitarian interior, the four-wheel-drive car takes on a no-nonsense approach in the face of a whole host of fashion-conscious rivals.

So, in an effort to boost the XV’s showroom appeal, Subaru has treated the crossover to a mid-life refresh. It now features sharper looks and an overhauled interior, and promises lower running costs. Here, we test it with the frugal and punchy 2.0-litre diesel and in mid-range £23,995 SE guise. 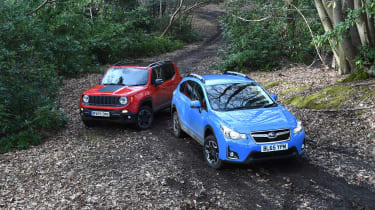 However, Subaru isn’t the only maker of four-wheel-drive vehicles that’s hoping to crack the profitable crossover sector. Jeep is also at it: the Renegade is the brand’s most ambitious model yet, and combines rugged looks and genuine off-road ability with family hatchback efficiency. We’ve already tested the capable but expensive Limited flagship, and now it’s the turn of the attractively priced £23,395 2.0-litre MultiJet Longitude 4WD edition.

Which of our crossover contenders makes more sense? We hit the roads and rutted tracks to find out.

When it comes to the rough stuff, our cars are surprisingly accomplished. The Subaru has 15mm more ground clearance, at 220mm, plus grippy all-terrain tyres. The compact Jeep’s shorter overhangs mean it has better approach and departure angles, while its Active Drive transmission gets Auto, Sand, Snow and Mud settings. 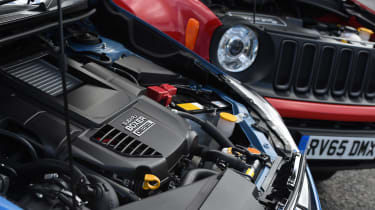 Subaru has stuck with its tried-and-tested boxer engine recipe for the XV. It delivers a low centre of gravity and allows easier packaging of itssymmetrical four-wheel-drive system. Jeep has turned to sister firm Fiat for the Renegade’s four-cylinder MultiJet diesel.

The latest XV is available in two new exterior colours – Dark Metallic Blue and the Hyper Blue seen here – but that’s about as far as its customisation goes. Jeep buyers can choose from a wide range of body decals, plus numerous interior trim inserts. 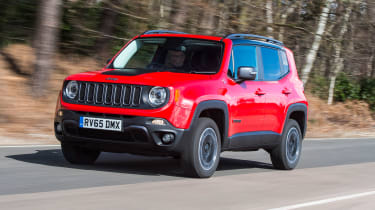 With its bold looks, customisation options, decent practicality and composed driving dynamics, the Renegade is a fine choice for families looking for something a little different. Yet it’s the car’s lower running costs that make the difference in this encounter, while the mid-spec Longitude model is the sweet spot in the range thanks to its attractive price and decent kit count. 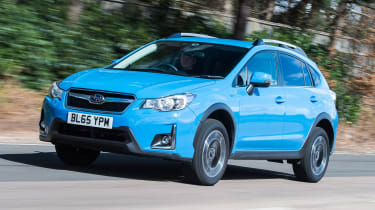 The XV has a lot going for it. Its four-wheel-drive transmission is one of the best in the business, while its boxer engine is smooth and powerful. Plus, the well equipped cabin gives the Subaru upmarket appeal, and it’s more capable off-road than you’d think. But the XV is undermined by high running costs, while suspension tweaks haven’t been successful. 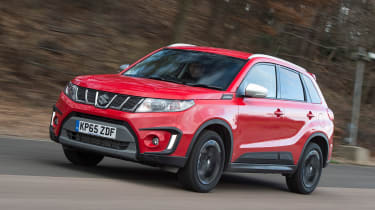 The rugged Vitara isn’t all that glamorous, but it’s spacious, good to drive and well equipped. Selectable ALLGRIP four-wheel drive gives all-weather traction, while the 1.6-litre diesel is smooth and efficient. 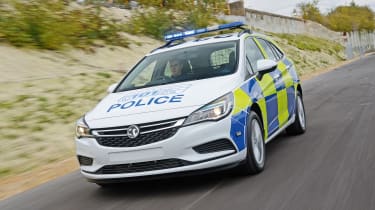 Few brands can match Land Rover’s off-road heritage, and if you don’t mind buying used, one of the last Freelander 2s offers a strong blend of luxury, car-like road manners and decent running costs. A 40,000-mile flagship HSE is just £23,000.