The Subaru XV gains a new e-Boxer engine, but is it any good? 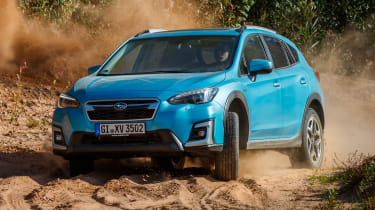 The Subaru XV e-Boxer is a good car – its depth of engineering, great build quality, impressive safety tech and rugged yet forgiving character shine through on and off-road. The addition of this e-Boxer hybrid tech has broadened the XV’s appeal, but the fact stands that the majority of UK buyers will be better served by front-wheel-drive rivals that are cheaper to buy and run.

The latest Subaru XV was introduced in 2017, built on the Japanese manufacturer’s Subaru Global Platform (SGP) that also underpins the all-new Forester. The car continues the brand’s focus on safety and go anywhere ability, but until now was only available with conventional petrol power; the new hybrid e-Boxer is the solution, following the brand’s abandonment of diesel engines.

The e-Boxer uses a 148bhp 2.0-litre flat-four petrol engine assisted by a small electric motor built into the latest iteration of Subaru’s Lineartronic CVT gearbox. A small battery sits under the boot floor where the previous model’s spare wheel was fitted. The XV’s new-found electrification allows for all-electric drive at speeds up to 25mph, along with reduced emissions and – in theory – improved fuel consumption.

Elsewhere, the latest XV’s fit and finish remains solid and the materials used in the interior feel suitably hard-wearing but not overly utilitarian – the e-Boxer gets unique copper-coloured trim to set it apart inside. It’s easy to find a great driving position in the comfortable front seats thanks to a wide range of adjustment. All-round visibility is excellent.

The XV e-Boxer isn’t the most practical car in this class, however. Its 345-litre boot – though unaffected by the addition of the hybrid system’s battery – is smaller than the majority of its rivals’, but there’s good space for passengers front and rear.

Standard kit is good on both SE and Premium trims, with all models getting a twin-screen infotainment system with eight and 4.3-inch displays. The larger, lower unit can run Android Auto and Apple CarPlay, making it easy to use your smartphone’s myriad functions on the move. Premium trim adds a sunroof, leather upholstery, sat-nav and a power-adjustable driver’s seat. 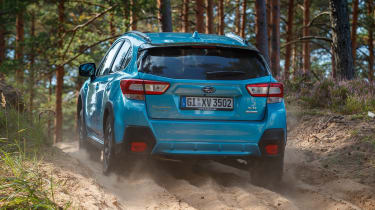 Subaru’s EyeSight driver assistance and safety technology is standard, operating via a trio of cameras in the XV’s windscreen – a system that helped the XV to gain a five-star rating from Euro NCAP in 2017. Each of its on-board systems works well in practice; adaptive cruise is intuitive to use, lane-keep assist subtle in its operation, and the automatic emergency braking system – tested using reassuringly soft obstacles – can bring the car to a gradual stop should the driver fail to brake for a stationary car in front. The system offers a warning before it intervenes and proved clever enough to distinguish between solid, dangerous obstacles and common off-road features during our test – something the XV is more than capable of tackling, unlike so many of its rivals.

The e-Boxer’s electric motor is used to help bolster the XV’s impressive off-road ability, delivering extra low-down torque when ‘X-Mode’ is selected via a rotary dial on the centre console. Combined with Subaru’s trademark symmetrical all-wheel drive system, the system makes short work of steep inclines and descents, shuffling power between the driven wheels on the way up and preventing a loss of control on the way down. Our test also incorporated a lean test – the XV can tip up to 30 degrees – and many kilometres of Latvian gravel and sand tracks; even at higher speeds and on road tyres, the XV feels planted and secure.

The XV’s powertrain is not entirely conventional, and its CVT gearbox will be the biggest stumbling block to those not used to the technology. Subaru has engineered in steps in the transmission, but large throttle inputs are still accompanied by a flare in revs that doesn’t quite match the car’s forward progress; there’s more torque and throttle response than you’ll find in the standard internal combustion models, but straight-line performance is adequate rather than impressive.

Low speed driving is a very comfortable experience, however. Under light throttle loads at low speeds, the e-Boxer drivetrain sticks with all-electric power – great for crawling in traffic jams or making emissions-free progress in 20mph zones. Unlike some rival systems, it’s easy enough to stay within this window by being careful with your right foot – although the engine will kick in to start charging the battery after a mile or so. 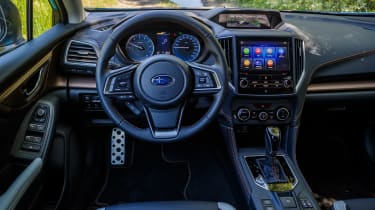 The petrol engine automatically assists (and charges the battery) above 25mph, before taking over completely at motorway speeds; the system also recharges its battery when the car is coasting or braking. Subaru says it has worked to improve pedal feel during the regen process – in practice the brakes feel linear and natural but don’t offer much bite at the top of the pedal’s travel.

Elsewhere, the XV’s ride and handling balance is well-judged for this class of car. Body roll is ably controlled despite the car’s sizeable 220mm of ground clearance, the well-weighted steering feels precise, and the suspension is remarkably supple yet composed, soaking up bumps both on and off-road without getting out of shape. It’s not a pure driver’s car, but the XV e-Boxer’s low centre of gravity and well-judged set-up mean it handles well.

Official fuel economy and emissions figures aren’t particularly impressive: the XV emits 149g/km of CO2 and only manages 35.7mpg on the WLTP combined cycle. Accepting relatively poor fuel economy is still a sacrifice to be made when choosing the XV over its cheaper, more efficient rivals.