The Subaru XV crossover has improved in lots of areas, but can it rival the class leaders? 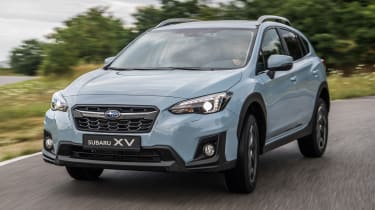 Subaru has improved the XV in lots of ways, but mostly where it was already good anyway. It’s now more capable off road, better to drive and safer than ever - all great things for existing customers who want to update. But new customers probably won’t be won over, because it’s still behind rivals when it comes to refinement, value for money and economy.

Subaru isn’t planning on launching its new XV until early next year in Britain, but we’ve driven a pre-production model for the first time. The previous model was rugged and good to drive, but couldn’t compete on price or refinement with its main rivals. The new generation aims to change that.

It’s certainly a step forward in terms of looks, because the new design is actually very handsome. A new grille and lights give it a more modern front end, while those sharp design lines along the sides and rear make it look lower and wider.

The plastic cladding around the wheelarches and tough-looking alloy wheels finish off the new look, which hints at the XV’s off-road ability without leaning too far into it. 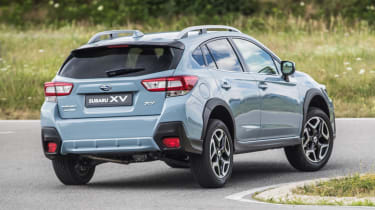 Subaru has also upgraded the interior, though not to the same extent. It’s been redesigned to be a bit simpler and more upmarket, with a few more soft-touch materials and shiny plastics - but it’s not a complete revolution. The twin-screen set-up is still there, and the dials and steering wheel are very similar to before as well. It’s not nearly as modern as the exterior, and feels cheap compared with most of the car's rivals.

At least the new eight-inch infotainment screen is more responsive than before. It will get Android Auto and Apple CarPlay, and is likely to be standard in the UK as well. However, it’s a long way behind the slick system offered in the Skoda Kodiaq and those of other European rivals, because the graphics look dated and it’s not as easy to use.

The seats are bigger, more comfortable and more supportive, though, which is useful both on the road and off it. To that end, there’s also a new X-Mode button on the centre console that sets the car up for low-grip surfaces and turns on hill-descent control.

We tried the car on a dusty off-road track, where its ability to climb loose gravel on a sharp incline impressed us, as well as its smooth descents on similar surfaces.

Subaru is rightly proud of its permanent four-wheel drive system, and it proves itself here; the XV is probably among the best off-roaders in its class. But it sits in a class where most buyers choose front-wheel drive, and only ever use their cars on the road.

The new XV is a little more expensive than its rivals as a result, although Subaru hasn’t decided on pricing yet (but we’re told it will be relatively close to what the current car costs).

We didn’t get the chance to try our pre-production test car on the road, and instead were limited to a super-smooth test track in Austria. The previous model had a fairly hard ride in the UK, but the new generation is better to drive; there’s less body roll in corners and the steering is a bit sharper. Torque vectoring means it can brake the inside wheels on a corner, tightening your line. It makes the XV feel more agile, and while it’s not as fun as a Mazda CX-5 it’s still pretty good to drive.

However an uncompetitive powertrain doesn’t do the XV any favours. The naturally aspirated 2.0-litre boxer petrol engine is smooth and responsive, though you won’t notice the extra 5bhp it has in the new model, especially as max torque is unchanged (at 196Nm). Those used to the turbocharged engines in the current crop of crossovers will notice the lack of low-end torque, because you need to use the revs to get the best performance out of the engine. 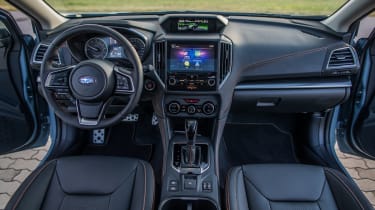 The Lineartronic CVT gearbox is one of the best of its type, and actually feels slightly more natural in this new model, but it still sends the revs soaring if you put your foot down because it’s the only way to make swift progress. That means the powertrain is still noisy and feels old-fashioned.

It’s likely to be reasonably efficient in normal driving, but owners looking for maximum fuel economy will need to look elsewhere because there won’t be a diesel XV - only 1.6 and 2.0-litre petrols.

It’s spacious inside, and although the boot is a bit small, there’s loads of legroom and headroom in the back, even for adults.

Subaru’s hi-tech EyeSight cameras are standard, and these allow a number of safety features that the brand says are more accurate than those on radar-based systems on rival cars.

There’s no way for us to confirm that claim, but the car does get pre-collision braking, active cruise control, lane-keep assist, cross-traffic braking, high-beam assist and blind spot monitoring. Euro NCAP will test the car soon, but for now we do at least know that Japan’s version of the crash-test lab gave the XV its highest score ever.