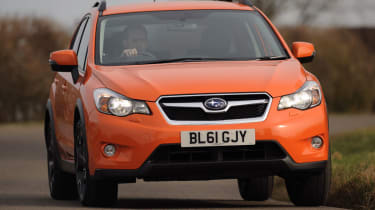 The Subaru XV is the firm's attempt to boost dwindling sales figures in Europe, by targeting the lucrative small SUV segment. It’s pitched at rivals such as the Nissan Qashqai, Mitsubishi ASX and Hyundai ix35, but top-spec cars overlap on price with more premium rivals like the Audi Q3 and BMW X1, too. There’s a choice of a 2.0-litre petrol engine, with CVT or manual gearboxes, and a 2.0-litre boxer diesel. All models get Subaru’s legendary permanent AWD as standard.

Launched back in 2012, the Subaru XV received a two-stage mid-life makeover in 2015/16. The first round of updates included a new instrument binnacle and the adoption of Subaru’s touchscreen infotainment system, as well as chassis tweaks to improve ride and handling with new spring and damper rated. Extra soundproofing and thicker glass were introduced to reduce cabin noise. That little lot was followed up in early 2016 by some small but significant exterior tweaks, including new headlamps and bumpers, a new boot spoiler and LED taillights – plus some minor revisions to the engines designed to improve efficiency. 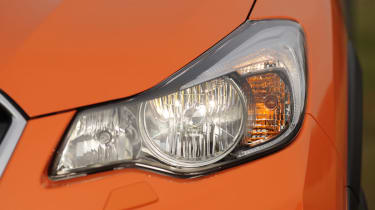 While we’re still some way off the model’s full replacement, Subaru has already revealed the next generation XV. Featuring a new design direction that moves the car even deeper into the sporty lifestyle/crossover sector, a production model based on the XV Concept is expected to arrive in Subaru showrooms by 2018.

The Subaru XV is a good-looking attempt at the fashionable lifestyle crossover sector, from a manufacturer better known for its rugged and practical 4x4 estates and SUVs. In some respects it’s a successful attempt too, as the XV offers excellent off-road ability, decent handling and a spacious and practical interior. It’s also well equipped, although prices are not the most competitive. The XV stumbles in two key areas though. Most significantly, the Subaru is jarringly uncomfortable on poor road surfaces, when rivals like the Nissan Qashqai aren’t. The XV also feels a little behind the times when you get inside, as the interior finishes lack the premium feel of rivals.

The Subaru XV is quite fun to drive, and the lack of ride refinement is offset by strong performance off-road

Subaru has a reputation for building cars that handle well and the XV continues the trend. It’s more fun than you might think on twisting back roads, thanks to the sharp steering and tight body control, but the unwanted trade-off is a harsh ride and noisy suspension. The suspension upgrades in 2015 have not improved things sufficiently to make the XV anywhere near as refined as its rivals for ride quality.

The 4x4 system is very rugged though, and because of the XV's low weight it feels really secure tackling rough terrain that would leave its crossover rivals stuck and stranded. Ground clearance too is significantly higher than the Nissan Qashqai (for example), so drivers needing significant off-road capability from their crossover might want to give the XV a try.

The 2.0-litre, 148bhp petrol ‘boxer’ engine provides decent pace, but the CVT gearbox is noisy and unresponsive, so we’d go for the manual. The 2.0-litre diesel gives away a couple of horsepower to the petrol, but has way more torque – 350Nm versus 196Nm. It revs cleanly and is by far the best engine choice, although the narrow power band means you’ll be using the smooth six-speed manual gearbox fairly often. The CVT isn’t available on the diesel. 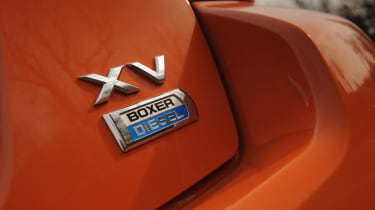 Fuel efficiency is OK but not startling, and the Subaru XV isn’t a low depreciation star either

In terms of fuel economy and CO2 emissions, the XV 2.0D is on a par with rival models with similar power outputs. It returns 52.3mpg and emits 141g/km, which is far from class leading, but means a theoretical range of more than 670 miles between fill ups.

The 2.0-litre petrol model emits 160g/km when fitted with a manual gearbox, and 151g/km if you choose the CVT automatic gearbox – a small improvement in efficiency but a big sacrifice in drivability. Economy claims for the combined cycle are 40.4mpg and 43.5mpg respectively. If you plan on covering big miles the diesel model will prove cheaper in the long run, otherwise either petrol is the smarter option.

Insurance groups for the Subaru XV range from 21 to 27, with the higher performing diesel models attracting the highest ratings.

Despite coming with a reasonable amount of kit, relatively poor residuals and high list prices mean the XV will likely cost more to own in the long run than a Skoda Yeti. Used car valuation experts CAP predict the Subaru XV will retain between 40 and 44 per cent of its new cost after three years/30,000 miles with the diesels performing best. The Skoda Yeti should retain between 46 and 55 per cent, and the Nissan Qashqai between 43 and 49 per cent over a similar period of ownership.

Eye-catching style and high equipment levels are good, but the XV is let down by poor interior finishes

With rough and ready models like the Forester and Outback, styling is always less of a consideration, but to attract more style-conscious buyers the Subaru XV gets a sleeker profile. The hexagonal grille and ‘hawk eye’ headlights are typical of the firm, while the plastic cladding and jutting rear bumper give the XV good road presence. All cars get 17-inch alloys as standard while diesels get the smart and functional roof rails too. 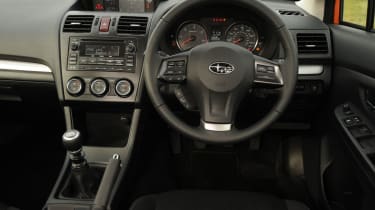 On the inside, a simple but logical layout, with three large air-con dials and two information screens, is let down by cheap scratchy plastics that look a decade old - not an attractive feature on any brand new car. However, on the plus side there’s a lot of kit included in the price, which helps to lift the XV experience.

The Subaru XV comes equipped with a large touchscreen in the central console, which offers a wide range of functionality including sat-nav, and accessing tunes on your smartphone via Bluetooth or USB connections. The Starlink system offers access to internet apps, and there’s a voice recognition system for phone calls, navigation and audio functions.

The Subaru XV has lots of space for passengers and boasts a large, practical boot

The Subaru XV’s permanent four-wheel drive system means it will be able to tackle adverse weather conditions and off-road challenges more effectively than the average style-focused crossover/SUV. The downside is less than competitive comfort on the road, but some users will think that a price worth paying – especially if they want to take advantage of the 1,600kgs towing limit.

In fact the XV is a practical car all round, with a roomy interior and lots of cubbies and compartments to store bits and pieces. 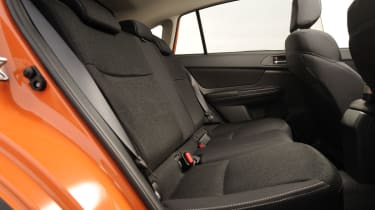 Wide door openings offer easy access to the interior, and the car feels almost as spacious in the back seats as it does up front.

Lift the tailgate and the XV has a 380-litre boot, which is smaller than the Nissan Qashqai. But fold the seats (almost) flat and that expands into a 1,270-litre load area, which beats the Qashqai and should cater comfortably for a family’s needs. The leading edge of the boot floor can be lifted up and hooked to the lip of the tailgate, providing a smooth ramp for sliding bags into the boot. 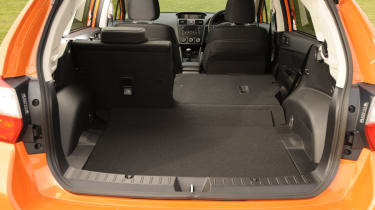 Reliability scores have dropped in the latest Driver Power Survey, but the XV has an excellent safety rating

The well-established Forester and Outback have endowed Subaru with a reputation for building reliable and rugged SUVs, so there’s no reason to think the XV won’t stand up pretty well to daily driving and the wear and tear of everyday life. The interior plastics, although cheap to look at and unyielding to the touch, are robust. However in the 2016 Driver Power Survey, the Subaru XV was ranked 130th overall out of 150 cars, and it only came 120th in the reliability category. This is not as strong a result as we’d have hoped for, as the reliability rating in 2015 was much higher.

Things look a lot more assured on the safety front, as XV comes with a good selection of safety kit too, including ABS, traction control, seven airbags, retractable pedals and a collapsible steering column. It has already scored the full five stars in its Euro NCAP crash test, including an impressive score of 90 per cent for child occupant protection.

Every Subaru except the WRX STI now comes with a five-year warranty included in the price.

With no fixed price service plans you’re at the mercy of your local dealer for servicing costs, and they’re likely to vary quite a lot. The situation isn’t helped by the fact that there aren't a great many dealers around anyway. Service intervals are variable, but reckon on services being required every year or at 12,000 miles.