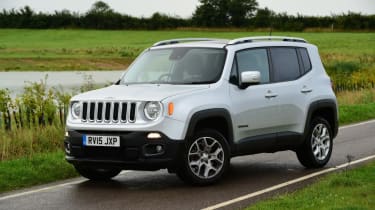 The Renegade might be the smallest model ever to come from Jeep, but that doesn’t mean it’s lacking off-road ability. Indeed, as has often been the case with previous Jeeps, ensuring that the Renegade can excel in challenging terrain means its on-road ability is compromised, but not necessarily by as much as you might think. Granted the Renegade is underwhelming and not that exciting to drive, but when you compare it with its rivals, the Jeep is a better all-rounder than expected. It’s also very good value and so far reliability seems to be competitive. So while the Jeep Renegade is no class leader, it’s still worth a closer look as long as you can get the right deal.

The original Jeep from the forties was a small, go-anywhere vehicle that was far more capable off the road than on it. But a car that’s perfect for war zones has limited appeal on the open market, which is why post-war Jeeps put more of a focus on carrying capacity and comfort.

Indeed, the original luxury off-roader wasn’t actually the Range Rover, but the Jeep Wagoneer that arrived in 1963, seven years before Land Rover’s all-conquering SUV. For more than 70 years Jeep has built one large SUV after another, so its Renegade took a few people by surprise. Here was the smallest, most efficient Jeep ever made, which was perfect for those on a tighter budget who wanted to buy into the Jeep legend. 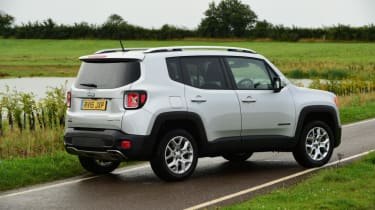 The Renegade arrived in the UK in February 2015, priced from £16,995 for the front-wheel-drive 109bhp 1.6 Sport. An alternative petrol engine was offered – the 1.4 MultiAir in 138bhp or 168bhp forms – plus a pair of diesels: the 118bhp 1.6 and the 138bhp 2.0 Multijets. Four-wheel drive was standard on the 2.0 Multijet; initially only this engine and the 1.4 petrol were available with an automatic box. The trim levels were Sport, Longitude, Trailhawk, Limited and Opening Edition.

A revised range reached the UK in September 2018, with a refreshed nose, LED headlights on some models, extra driver aids and new petrol engines. Out went the 1.4 and 1.6-litre units, replaced by turbocharged 1.0 and 1.3-litre powerplants rated at 118bhp and 148bhp respectively.

None of the engines or transmissions is poor, but as the only non-turbo powerplant, the 1.6-litre petrol isn’t as strong as the alternatives. Unless you plan on going off-roading, there’s no point seeking out a four-wheel-drive Renegade; the front-wheel-drive editions are usefully more economical. 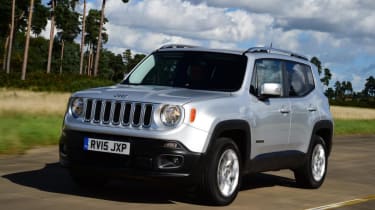 Alternatives to the Jeep Renegade

Because it’s a generously sized small SUV, the Renegade has no shortage of rivals. Not only is it up against compact models such as the Vauxhall Mokka, Ford EcoSport, Renault Captur and Peugeot 2008, but also in its sights are the slightly larger MINI Countryman, Mazda CX-3, Skoda Yeti, SEAT Ateca and Nissan Juke.

There’s also the Fiat 500X, with which the Jeep shares its chassis and engines, and which offers a stylistically different take on the small-SUV formula.

All of these rivals are designed primarily for on-road use and, if the Renegade has a failing, it’s that Jeep has focused a bit too much on the car’s off-road abilities at the expense of on-road dynamics and refinement – unlike those alternatives.

The Renegade’s hauling capacity isn’t quite what you might expect; it can be as low as 860kg, but rising to 1,500kg, depending on engine.

We haven’t uncovered any significant common faults on the Renegade; only the very earliest models are now out of manufacturer warranty.

The 2.0 Multijet is paired with a nine-speed gearbox, while the 1.4 MultiAir and 1.6 Multijet engines are fitted with six-speed autos.

A tyre mobility kit is supplied as standard, but a full-sized spare wheel and space saver are options, although not on the Trailhawk. 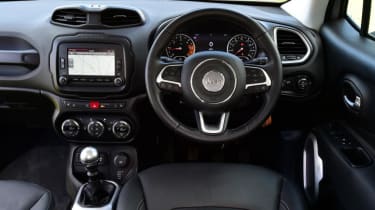 Given the Renegade has relatively large proportions for its segment, cabin space is good, with masses of head room and decent legroom – for four; the centre rear seat is more cramped. Material quality is adequate, but visibility is hampered by the thick pillars, and front-seat comfort is compromised by low headrests. Boot space is class-competitive, at 351 litres, or 1,297 with the seats down.

Renegades must be serviced annually, or every 9,000 miles for petrols and 15,000 miles for diesels. Services alternate between minor and major, at £169 and £399.

All engines bar the 1.6 petrol have a cambelt, which is replaced every six years for £599. Jeep dealer services add free breakdown cover, while service plans are on offer. Since July 2018 the Renegade has had a five-year/75k-mile warranty, plus five years’ roadside assistance. 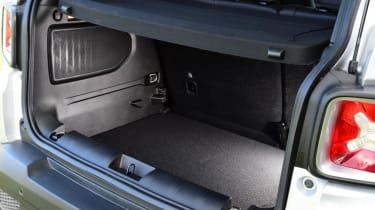 The Renegade has been recalled twice, both times on 31 March 2017. The first affected 1,418 Renegades built up to October 2014, which were fitted with a faulty wiring harness that could lead to the transmission changing to neutral. The second affected 34 Renegades built in October and November 2016. These were fitted with faulty side airbags which could fail to deploy correctly.

The Renegade has never made our new or used Driver Power surveys, because Jeep’s UK market share is too small. But there are plenty of Renegade reviews at carbuyer.co.uk, with an average score of 4.3 out of five. Two-thirds of buyers give a five-star review, yet it seems dealer service can be a problem. Refinement, value and comfort get the thumbs up, though.