The new Jeep Renegade is a compact crossover with proper off-road ability. We've driven it on UK roads 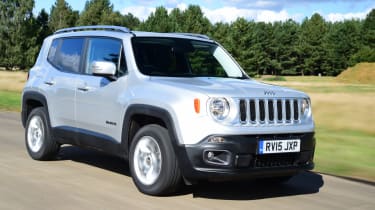 The Jeep Renegade is an interesting newcomer to the fastest-growing sector in the world. With the Renegade, Jeep didn’t want to water-down its heritage so it's a crossover that’s brilliant off-road - but average on it. If heading out of bounds is your thing, then look no further, but we suspect the Renegade is just a little too skilled in one department.

Famous for producing large and very capable off-roaders, the American Jeep brand will add a number of new models to its range over the next three years to finally take on the Europeans head-to-head. And leading the charge is the Renegade, a brand new entry-point to Jeep ownership.

Using the new Fiat 500X as its base, the new Jeep enters the fiercest and fastest growing model sector in the world – the compact crossover segment, dominated by the likes of the Nissan Juke, Renault Captur and Audi Q3. But while this marketplace is home to crossovers designed with the King’s Road in mind rather than the Cairngorms, Jeep is keen to reverse this trend. It’s throwing its near 70-year heritage at the little car and endowing it with best-in-class off-roading ability. There’s even a special Trailhawk model designed to take on genuinely challenging off-road trails. 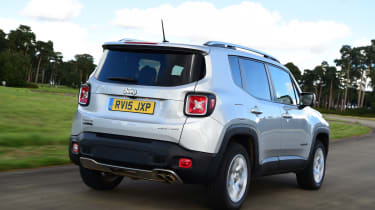 We got behind the wheel of the car set to lead Renegade sales in the UK – the mid-spec Limited fitted with a 2.0-litre diesel engine and four-wheel drive. First impressions are good; the Renegade’s boxy styling looks different from more curvy rivals like the Nissan Juke and Vauxhall Mokka, even bearing a striking resemblance to a Hummer, but one that’s shrunk in the wash.

It’s large too – it’s almost the same size as Nissan’s Qashqai from the class above and this translates to a roomy cabin. Up front the driver and passenger sit far away from each other; in the back, there’s loads of head and legroom and the boot space is almost on par with the Skoda Yeti – there’s 351 litres with the seats up which swells to 1,297 when they’re folded. The cabin’s build quality is decent enough but cheap-feeling in places. Limited is well-equipped, though as it comes with sat-nav, dual-zone air con and DAB. 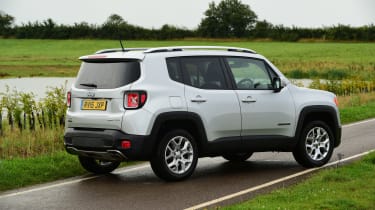 Inside, the climate control dials and central 6.5-inch touchscreen are recognisable Fiat parts bin pieces, but that’s alleviated by a massive dose of Jeep ‘Easter eggs’. Logos of the Jeep grille, a bold ‘Since 1941’ motif and even a ‘mudsplat’ instead of a redline in the tachometer all inject – slightly clunkily – some quirky appeal.

Beneath the garnish, the cabin has a few foibles however, like the seat headrests which don’t adjust high enough causing them to dig uncomfortably into your shoulders. While the top of the dashboard you never touch is all squidgy plastic, the materials around the centre tunnel that you’ll feel every time you release the parking brake are hard and scratchy.

And though the boxy shape and its wide-opening doors offer plenty of room front and rear for a medium-sized family, the thick pillars mean visibility is dreadful. Add in slow steering and you’ve got a little car than manages to feel rather cumbersome and unhelpful around tight urban streets. 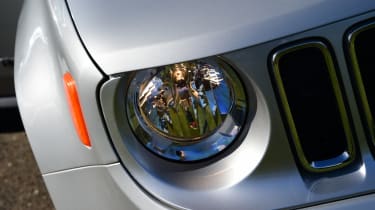 If you’re a fan of the chunky looks but don’t need to climb mountains and ford streams on your way to work, you can just buy a regular front-wheel-drive Renegade instead. In total, Jeep will offer a staggering 16 different powertrain variants of the Renegade, including three different four-wheel drive systems, an automatic gearbox, a manual and a twin-clutch transmission, and in the UK, three engine choices.

On the move and the 140bhp 2.0-litre is a strong and quiet performer with 0-62mph taking a respectable 9.5 seconds, and returning 55.4mpg and 134g/km of CO2. However, the boxy shape increases wind noise and the ride is bouncy.

The Renegade’s party trick to trump rivals is its auto 4x4 system that switches between two- and four-wheel drive and it’s impressive off-road upholding Jeep’s rugged reputation. But we can’t help but feel it’s a little too focused on going off-road – an activity most small crossover buyers aren’t interested in. We’d go for the 2WD 1.6 diesel in Limited spec saving £2,500.

There’s no doubt the Renegade is an interesting alternative to other compact crossovers, but while some rivals are stronger in all areas, the Renegade will appeal to those who want to buy into the Jeep lifestyle.