The Jeep Renegade SUV has been refreshed for 2018, with subtle design changes and a new engine range 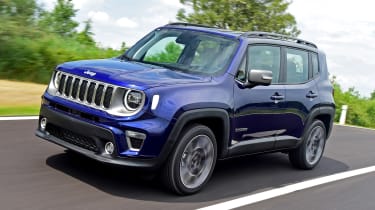 The Jeep Renegade still can’t compete with the sharpest SUVs in this class, but it’s not without merit. If you’re after a spacious, comfortable and stylish SUV, the Jeep is worth considering. This new turbo engine is powerful enough and suitably refined, but pricing is still a sticking point. In time, this will determine its outright value.

Fiat Chrysler is on course to diversify the Jeep brand early in the next decade, with electrification and new segments on the horizon for the group’s off-roader brand. A new entry-level model will slot into the line-up in 2022 as well, but for now the Renegade remains the smallest member of the line-up.

On sale since 2014, the Renegade has another four years of life left in it before a second-generation version appears, hence the need for a mid-life facelift. On sale now and arriving in showrooms this September, the refreshed car sports very subtle design updates – new LED headlights and taillights are served, plus new wheels and slightly altered front bumpers on Limited cars.

Instead, the big news is the introduction of two new, turbocharged, all-aluminium petrol engines under the bonnet. Both engines are part of a new modular family, with a 1.0-litre three-cylinder with 118bhp propping up two more powerful four-cylinder options. 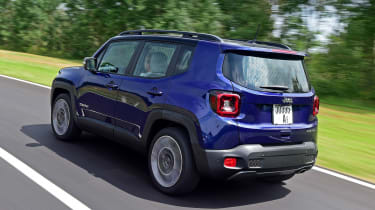 The range topping 178bhp car will come equipped with all-wheel-drive, but driven here is what now occupies the middle of the Renegade’s petrol pack. It’s a 1.3-litre four pot, developing 148bhp, 270Nm of torque, and sending drive to the front wheels via a six-speed DCT automatic gearbox.

The new modular petrol engine line is big news for FCA as a whole, and the facelifted Renegade is the car chosen to debut them. Called MultiAir II, The units have yet to be homologated, but fuel efficiency increases of up to 20 per cent on the original MultiAir units are promised.

What we can say for sure is that power and performance has improved. This smaller, 1.3-litre 148bhp engine essentially replaces the 138bhp 1.4-litre, and also arrives with a healthy 270Nm of torque. Day to day, this engine will pack more than enough punch for almost all Renegade buyers, with a sub-ten second dash to 62mph to boot.

That said, the rest of the new engine package is a mixed bag. Motorway refinement is impressive – the wind noise created by the Renegade’s boxy shape and huge wing mirrors at cruising speed is far more noticeable – and while it does turn slightly coarse at higher revs it’s hardly a major fault.

Instead, the drivability of the 1.3-litre, equipped as standard with a dual-clutch automatic, isn’t quite as sweet and responsive as you’d hope. The power is there, but on these very early cars it doesn’t come out silky smooth all the time, with a tendency to lurch and lag due to the slack transmission. It can also sometimes hold boost for a split second off throttle.

Like the new powertrain, the ride has a definite sweet spot too – it’s certainly more pliant at speed rather than at a town-pace crawl – but overall the Renegade is a fairly comfortable car. It’s not the sharpest steer in the world or indeed the crossover class, but there’s enough weight in the wheel for it to not be totally numb. All-wheel-drive versions are capable off road, and front-wheel-drive cars like ours will happily do some soft-roading. 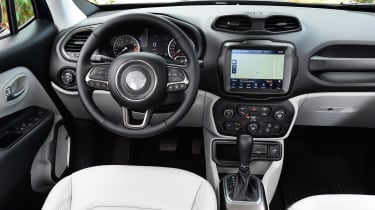 The Renegade feels spacious. Legroom and shoulder room is fairly run of the mill, but the roof is exceptionally tall for a car in this class, so there’s a mile of headroom creating an airy feel to the cabin. The interior itself feels robust and well built with solid switchgear, though you can’t avoid the cheap plastics – everything but the dashboard is hard and scratchy. The only real change to the cabin design comes around the centre console, with additional storage cubbies found here.

Around the back, boot space remains at 351 litres with all seats in place. In contrast to the cavernous feel of the cabin, it’s not all too competitive. A Nissan Qashqai, itself not a true class leader for practicality, gets 430 litres, for instance.

Limited Renegades get a smart and slick ‘Premium Instrument Cluster’ as standard, wedging a seven-inch colour display in-between the rev counter and speedometer. However, you’ll still have to pay extra to get the flagship 8.4-inch central infotainment system. Now featuring Apple CarPlay and Android Auto, this newer screen is sharp and straightforward to use, and a big improvement on the infotainment found on earlier Renegades.

New specifically with the facelifted Renegade is extra assistance and safety tech. Traffic sign recognition is new and comes standard on Limited versions, while the rollout of lane keep warning and assist as standard across the line-up is welcomed too.