The Jeep Wrangler is a rugged and capable off-roader, just don't ask too much of it on tarmac 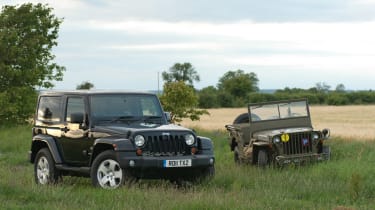 The Jeep Wrangler is the US equivalent of the Land Rover Defender. Its looks hark back to the Willys Jeep from World War II, but the Wrangler was introduced as an all-new model in 2007. There’s talent to back up the rugged styling, as the four-wheel-drive machine’s off-road ability has to be tried to be believed. Whatever the terrain, the Wrangler will find grip, thanks to its permanent four-wheel drive and low-ratio box.

But just like the Defender, the Wrangler’s off-road prowess comes at the expense of comfort and refinement on the road – you’d have to be a diehard fan if you were going to drive one on a daily basis, as the bouncy suspension, slow steering and short gearing make for hard work. Interior space isn’t great, either, although the hard-wearing plastics can take a beating and still look good - they're easy to hose down. The Wrangler is offered in Sahara and Overland spec and in two or four-door body styles, with a hard top or optional canvas roof. If you want something extra, Jeep offers a special order service, where you can personalise the Wrangler to your own tastes, including the choice of a petrol manual V6.

We wouldn’t recommend the Wrangler as a daily driver unless you live in the wilderness. Performance on-road is agricultural – the steering is low geared, so you’ll find yourself flailing at the wheel if you’re parking in a tight spot, while the stiff suspension sends all manner of bumps and thumps into the cabin. Add to that a 2.8-litre diesel that quickly runs out of puff and a five-speed auto box, and there’s not much to recommend about the Wrangler. If you want a manual, you can only get it with the thirsty 3.6-litre V6 if you go through Jeep’s special order service. Head off-road, and it’s transformed. Diff locks and a low-ratio box help the Wrangler tackle just about any kind of terrain, while the short overhangs front and rear mean steep slopes are no problem. And the 2.8-litre diesel has plenty of low-down power to haul you out of the deepest ruts.

Brick-like aerodynamics, permanent four-wheel-drive and an auto gearbox mean the Wrangler isn’t great for economy (around 35mpg, depending on model) or emissions (just under 220g/km). However, its main rival, the Land Rover Defender is even worse. There are four models in the range, and prices are around £2,000 less than a similarly equipped Defender, but the Jeep will lose more money because it doesn’t quite have the desirability of the British 4x4.

The rugged looks of the Jeep Wrangler are directly inspired by the Willys Jeep of World War II. There’s Jeep’s trademark seven-bar vertical grille, round headlights, exposed door hinges and separate wheelarches front and rear, and it looks a bit more modern than a Land Rover Defender. There are two and four-door bodystyles, with the latter having a wheelbase that’s 523mm longer, which boosts cabin space. What’s more, you can fold the windscreen and remove the roof and doors for an open-air driving experience. Inside there’s an upright dashboard, lots of chunky detailing and easy-clean plastics, but you wouldn’t call it comfortable.

The four-door Jeep Wrangler is a big car – at 4,751mm long, it’s nearly as long as a Land Rover Discovery 4, but while that car’s a seven-seater, the Wrangler barely has room for five. The front seats are cramped, the rears aren’t much better, and the boot is only 498 litres, when the Disco 4 in five-seat guise has 1,192 litres. Access to the boot is via a side-hinged door, so you need to leave a decent gap behind if you want to get in there. Having said that, the Land Rover Defender is even more cramped, and it doesn’t have a separate boot.

You’d expect a no-nonsense 4x4 to be pretty reliable, and the Jeep Wrangler has a solid reputation. Years of development in the harshest conditions have contributed to that. However, the Wrangler could do with more safety kit: it only has two airbags for the driver and passenger, and while electronic stability control is standard, the Wrangler does without clever kit such as hill descent control or hill hold.